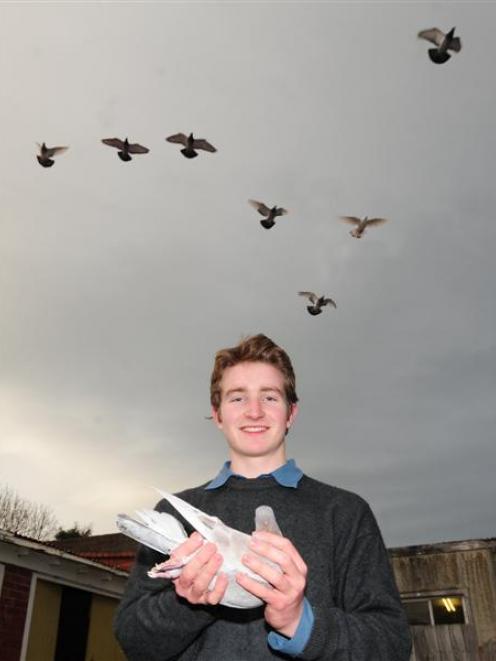 Pigeon racer Thomas Bishop holds his bird, Eureka, while the other pigeons in his stable have a work-out. Photo by Craig Baxter.
Homing pigeon racing is a minority sport, but Thomas Bishop never feels lonely because he is always surrounded by his birds.

Thomas (17), a year 13 pupil at Kavanagh College, had a rapport with animals and birds before pigeon racing became his passion three years ago. He built an aviary at his Dunedin home and has had a successful racing career over the past two years.

He has names for all his birds and numbers attached to a ring on their leg identify them.

"But I can tell them apart by their colouring," he said.

"They all have different personalities.

"They recognise me and get frightened when someone they don't know feeds them."

During the past year his four best birds have won five major events.

Rocket Man won the race from Christchurch in 5hr 30min.

Ace, another of Thomas's birds, went even faster to win another race from Christchurch in 3hr 50minEureka, his most versatile bird, won two major races - from Ashburton (3hr 07min) and Timaru (2hr 10min).

It was not a continuous journey.

"They stop to sleep when it gets gets dark and start again at sunrise," Thomas said.

"They don't eat anything on the way."

His pigeons have a homing instinct, move fast, and have the following best times from: Palmerston North (9hrs), Christchurch (3hr 50min), Ashburton (3hrs 07min), Timaru (2hrs 10min). The birds travel to their race venue in a pigeon hamper and immediately fly back home when they are released. "I enjoy seeing the birds fly home after waiting two hours or more for them," Thomas said.

"The best part for me is when they arrive home after a long flight, put their wings back and move straight into their pen," Thomas spends two hours a day looking after his birds.

Their main diet is brown peas, maize, peanuts and a budgie mix.

"The pigeons eat two tablespoons of food each day," Bishop said His birds won a prize at this year's Dunedin poultry, pigeon and caged bird show at Forrester Park.

John Bishop, Thomas's father, used to keep pigeons when he was young.