From pens to pansies 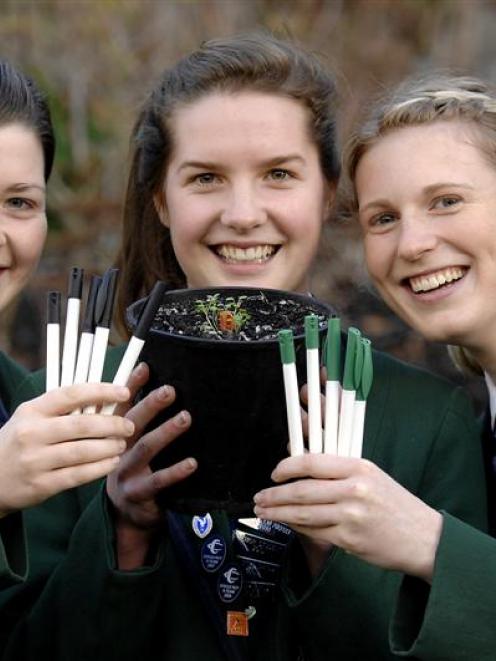 The Columba College Re-think Green young enterprise team has come up with the Bio Seed Pen - a ballpoint pen made of corn starch that biodegrades, breaking down into nutrients to fertilise seeds.

Re-think Green managing director Biddy Skerten said the pens looked like any other pen, except for the small cage attached to the end.

When the ink was exhausted, the spring and ink reservoir could be removed, and seeds put into the seed cage.

"Then you place it in the ground with some water, and it biodegrades into fertiliser, which will help the seeds grow. It's really a tool. It's a great way to get our message of sustainable living out into the workplace."

As long as the pens were kept dry, they would remain intact. But once one went into soil, it would biodegrade within six months.

Biddy said the team initially imported 10,000 from the manufacturer. However, more than 6000 had been ordered by Dunedin businesses, the Otago Polytechnic and the School of Business at the University of Otago, so now the young entrepreneurs were considering ordering another 10,000 to keep up with demand.

"There seems to be a real push towards sustainability at the moment. It's like a revolution. It's great for our clean, green image," Biddy said.

Biddy said the Re-think Green company directors planned to continue selling the Bio Seed Pens next year in the hope their sales would help pay for the girls' university studies.