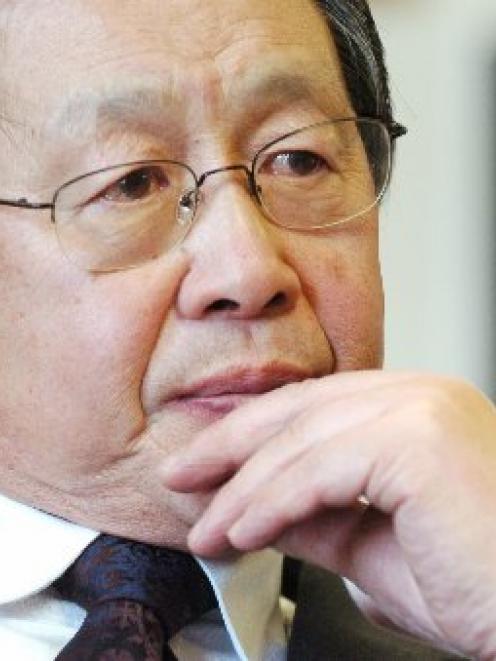 Peter Chin
Former Dunedin mayor Peter Chin is recovering in hospital after being revived by an Air New Zealand crew shortly after take-off, it has been confirmed.

The 73-year-old collapsed on Flight NZ5032 from Dunedin to Wellington yesterday morning, prompting the flight to return to Dunedin just before noon following the mid-air incident.

Mr Chin was "resting comfortably'' in Dunedin Hospital, where his condition was being monitored, spokesman Rodney Bryant said.

Last night he contacted the Air New Zealand crew to personally thank them for helping to revive him.

Mr Chin, who served two terms as Dunedin Mayor between 2004 to 2010, has been visited by family and was a "bit grumpy'' he was unable to watch sports on television.

He was expected to remain in hospital until further medical tests had been completed, and has requested privacy during this time.

"We were about five or 10 minutes into take-off and the fella behind me was just not very well. The airline attendant picked up on that pretty quickly, she tried to get him to respond, but he wasn't responding.

"She very, very efficiently pulled him down onto the floor and got the resuscitation pack out and brought him around with the assistance of the other two crew.

"Once he'd been shocked, he came back around,'' Mr Woods said.

"They isolated him on the ground, they had him in the recovery position and the machine keeps going, it monitors the heart just to see if CPR's required.''

The plane then turned around and landed and the man was rushed to hospital, he said.

"He wasn't very well, but he was certainly breathing and everything by the time we'd landed.''

"The emergency landing was very well done, it was perfect, it was a very quick descent, but obviously they were trying to make it as comfortable [as possible].''

A St John Ambulance spokesman said the passenger suffered a serious medical incident - believed to be cardiac related - and was taken to Dunedin Hospital in "a very serious condition''.

An Air New Zealand spokeswoman said it was not appropriate for the airline to share details of the incident.