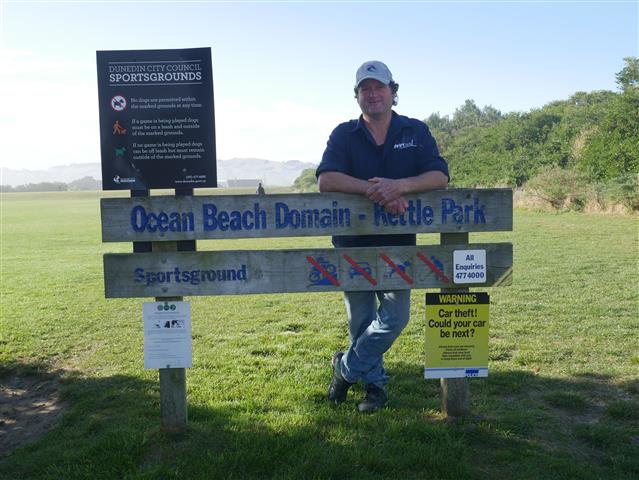 Steven McGregor is suggesting a boardwalk from St Clair to Lawyers Head be built and Kettle Park to be turned into a domain. Photo: Jessica Wilson
A Dunedin resident has an idea to make use of one of the city’s under-utilised areas.

Steven McGregor, of Sawyer’s Bay, has launched a petition for the Dunedin City Council to build a boardwalk from St Clair to Lawyers Head and create a public domain on Kettle Park.

“I just think it would be a really nice walk for people to enjoy along the beach front,” he said.

There were a limited number of areas for people to go for a walk, ride their bikes or have a picnic near St Clair and St Kilda beaches, and his idea could “greatly improve” that.

The under-utilised Kettle Park could be turned into a recreational area with barbecues and picnic tables, he said.

A big domain would enhance the city and it could still be used for sports games.

Since there was also not much parking, Mr McGregor suggested the car park behind the St Clair Tennis Club, in Victoria Rd, could be expanded.

This would also benefit local businesses, as people could leave their cars there and walk to the shops and cafes.

Mr McGregor said he had seen similar walkways in other major cities around New Zealand and thought Dunedin should take note.

He floated his idea with the council a few years ago, when it was asking for suggestions on what could be done, he said.

Dunedin City Council coastal specialist Tom Simons-Smith said it was exciting to see the community to share their thoughts on improving the area.

Repurposing the coastal front would require substantial time and effort, and there would be a range of benefits.

“This could have a large impact on current recreation space users, which would of course need to be managed appropriately,” Mr Simons-Smith said.

Mr McGregor’s idea was similar to one of University of Otago associate prof Mike Hilton, which also aimed to use the reserve for recreational activities, he said.

The council had a St Clair-St Kilda coastal plan engagement process which sought feedback from people about their values and ideas for the coast.

“We hope that people will get involved in the process to develop a plan that addresses challenges such as erosion, safety and access,” Mr Simons-Smith said.

“This stretch of coast is popular and valued by the community and we will be working alongside them to improve it further.”

A walkway already exists there, it's called the beach.
Please don't put stupid ideas into the head of our mayor, surely you have witnessed the destruction taking place in the name of a cycle way between St Leonard's and Port Chalmers......its only gets worse from here....