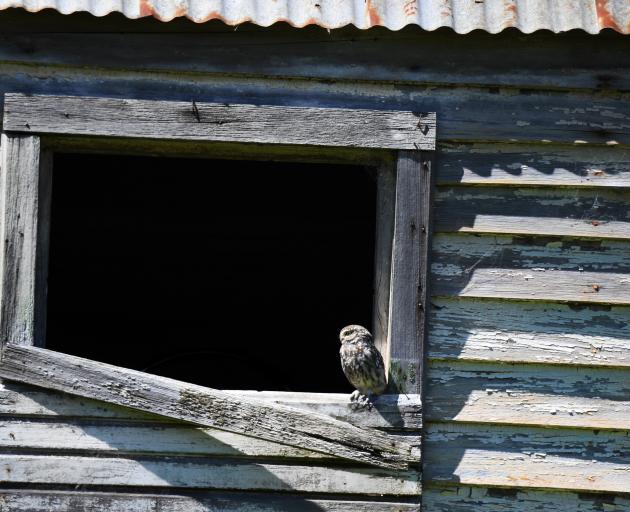 This little owl blends into the sun-lit, weathered boards of a derelict building near Tunnel Beach Rd, in Dunedin, yesterday. PHOTO: STEPHEN JAQUIERY
After many years of looking but not seeing much, Dunedin zoologist Anthony Harris was delighted to see a photograph of a little owl.

Otago Daily Times illustrations editor Stephen Jaquiery photographed the bird as it was perching on the windowsill of an old building near Tunnel Beach Rd, in Dunedin, yesterday afternoon.

Mr Harris, who is also an Otago Museum honorary entomologist, said he had been keeping an eye out for little owls (Athene noctua) for about 40 years.

He had found several nests in abandoned barns on the Taieri over the years, and within the nests had seen the bones of small rodents and birds and the remains of insects, but he had glimpsed little of the little owl itself.

The little owl was introduced in Otago and Canterbury, from Germany, between 1906 and 1910 in an effort to control the numbers of exotic small birds feeding on orchards and crops.

Mr Harris said the photograph showed the "characteristic habitat" of a bird which often nested in abandoned rural buildings and was rarely seen, despite often hunting small birds during the day, and digging up earthworms in bright sunlight, as well as feeding in the evening.

His only sighting of a live little owl had come 32 years ago, "which suggests they are little seen", he said.

Are those owls very few in number or "a little-seen species"? They must be very smart to remain out of human sight in spite of "hunting small birds during the day, and digging up earthworms in bright sunlight". The colour and speckled plumage as shown in the photo looks as if it would blend in almost anywhere outdoors.