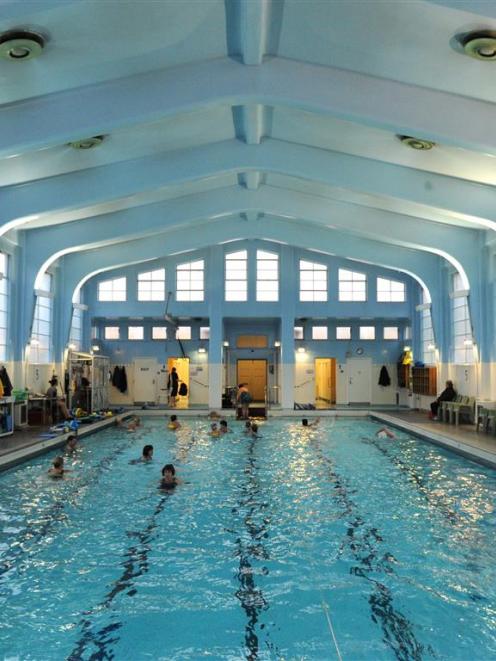 Aqua joggers and swimmers use physio pool facilities. Photo by ODT.
Hopes the Dunedin physio pool upgrade would start this year have been dealt a blow after it emerged a long-term lease is unlikely to be granted any time soon by the Southern District Health Board.

Otago Therapeutic Pool Trust postponed the $1million upgrade, which had been scheduled for the start of this year, but said it hoped the delay securing a lease would not be significant.

However, an internal Ministry of Health document, released under the Official Information Act to the Labour Party, shows the pool has to wait until later next year, when decisions are made about the Dunedin Hospital redevelopment.

The pool is part of the Fraser Building, on the Dunedin Hospital campus.

"The ministry suggested a termination clause which would be activated only if the land was required for redevelopment.

"This would be known in 18 months' time,'' the February 17 minutes of a DHB-ministry monitoring meeting says.

The trust could not agree to a termination clause being part of the deal, trust secretary-treasurer Neville Martin said.

The trust had not been kept well informed.

"I'm in the dark as much as the public is.

"It would be of huge benefit to the trust if the ministry could confirm soon, rather than in 18 months' time, that whatever redevelopment was envisaged for the hospital, the site of the pool would be unaffected,'' Mr Martin said.

Extensions were being sought on community grants allocated for the project.

"As the trust has raised $1million for the upgrade, it is not unreasonable for the trust to require security of tenure in a lease before spending the money.''

In response to questions, commissioner Kathy Grant replied by email that it was a "work in progress with good interaction with the pool trust, DHB, and Ministry of Health''.

Mr Martin said he did not think the pool site would be affected by the redevelopment, which was more likely to happen on the other side of the campus.