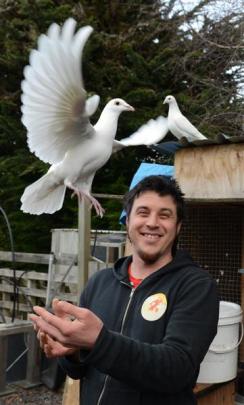 Pigeon racer Ben Johnston, a member of the Mosgiel Homing Pigeon Club, with some of his pigeons at his Abbotsford home. Photo by Linda Robertson.

It was just under a decade ago that pigeon racing finally went digital, Ben Johnston says.

Before then, the sport had retained a decidedly antique flavour.

''They have these beautiful old-fashioned clocks, all analog,'' Mr Johnston said.

''The bird had a band on its leg, and when it came home, you had to catch it, grab the band off its leg, and pop [the band] into the clock. There was a lever that stamped the time. It's an amazing piece of equipment.''

Mr Johnston was not there to see the changeover - he started about three and a-half years ago. He only knows about the clocks because he got one as a present.

But even without the sport's antique trappings, Mr Johnston has fallen in love with pigeon racing.

He is an active member of the Mosgiel Homing Pigeon Club.

He has about 35 pigeons, 10 of which race on a regular basis.

This is how it works: the pigeons will be driven to the start location in a truck, then released at a set time.

When they arrive home, their time is clocked by a computer chip that scans as they arrive.

Oamaru was the shortest race they did, Mr Johnston said. Sometimes they raced from as far as Palmerston North.

Mr Johnston's racers had made the trip home from Christchurch in about three and a-half hours.

''You can tease everyone else if you're beating them all the time.''

A big part of why Mr Johnston liked the sport was more about the pigeons themselves than the racing, he said.

''Something I've always liked about homing pigeons [is] that they're not locked up in a cage all day; you let them out, away they go, and they come back in on their own accord.''

And if they keep coming home, Mr Johnston said, it must mean they are happy.

The pigeons do not come into the house he shares with his wife and children.

But if he lived alone, there would probably be at least one living inside, he admitted, somewhat sheepishly.

Mr Johnston said he was often not home to see his pigeons get in after a race. With the latest pigeon racing technology, he did not have to be.

But sometimes, he would wait at home for his pigeons to arrive, just in case.

''Because sometimes, they'll muck around and find a puddle and have a bath or something. If [you're] home, you could say `come on, mate, it's time to get in'.''