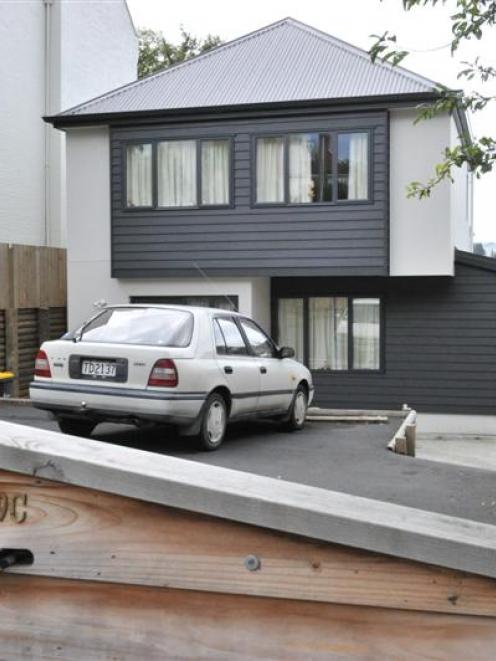 This property is breaching rules as it has too many bedrooms. Photo by Linda Robertson.
A Dunedin City Council planner has ''strongly'' recommended against giving retrospective consent for bedrooms illegally added to a pair of student flats.

Alan and Kay McKay applied for retrospective resource consent for two separate units at 99 Clyde St after a previous owner illegally added extra bedrooms in the lounge area of each unit.

The two bedrooms meant there were 13 bedrooms on the site, which was split into three units, and made the property two bedrooms above the maximum allowable density.

The extra bedrooms also meant the property breached district plan rules for the amount of outside amenity space and parking.

Council planner Daryl Sycamore gave multiple reasons for ''strongly'' recommending resource consent be declined, including a fear other student flat owners would make similar consent applications if this one was approved.

''Crucially, it is my opinion that the proposal will create an undesirable perceived precedent.

''The proposal will, in my opinion, challenge the integrity of the district plan.''

He also cited water and waste services staff, who opposed the development on the grounds there were already significant wastewater surcharge and flooding issues during heavy flooding in the area.

The density rules were set in part so servicing infrastructure in the area could withstand the level of use.

In applying for the retrospective consent on behalf of the owners, Conrad Anderson said converting the rooms back into lounge areas would create ''unduly large'' common areas.

''Such areas are generally undesirable in student accommodation, and of little need within studio accommodation.''

Of the five people to make submissions after the application for consent was publicly notified, four supported the retrospective consent being given and one opposed.

Of the four supporters, two were previous or current tenants and another was a cleaner for the property.

Bridget Tuitufu and Ethan Leggett, who previously lived in a room in one of the units as a couple, said the lounge area was little used and a larger one was not needed.

''We strongly agree that the living and cooking space is sufficiently able to cater to five bedrooms.''

''Allowing a retrospective consent like this would only give more opportunity for future people to flout the current rules.''

Mr Sycamore's report would be one piece of evidence when the council's hearings committee met to hear the consent application this week.