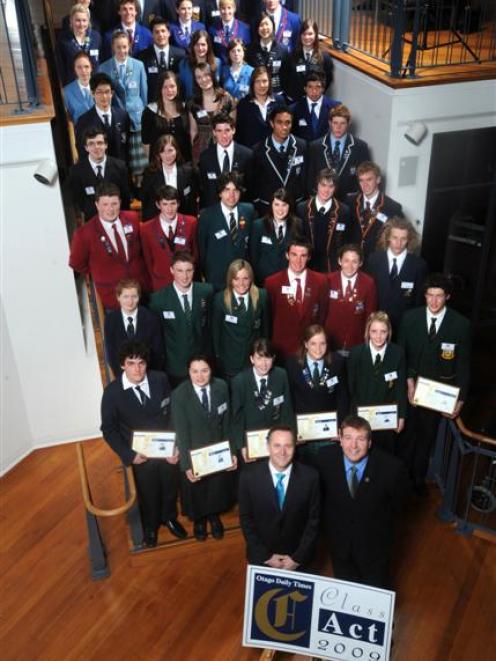 'Otago Daily Times' Class Act 2009 award recipients gather at the Dunedin Public Art Gallery yesterday after being presented with certificates by Prime Minister John Key and 'Otago Daily Times' editor Murray Kirkness. Photo by Peter McIntosh.
"If you really want it, and you want it above everything else, you'll make it."


• See photos of the occasion

Mr Key said there were some incredibly talented people in life, but they were not the most successful because they did not "want it enough".

"They don't have that vision to succeed."

He congratulated the 55 Otago secondary school pupils for making the most of opportunities and excelling in a variety of academic, cultural and sporting fields.

He also acknowledged the "love, guidance and support" of their families, friends and mentors, because he believed that was what had given them the inspiration they needed to become Class Act award winners.

"This is probably the first of many awards you are going to receive in your lifetime.

You are obviously high achievers."

Academic, sporting, social, artistic or cultural excellence, leadership qualities, or a combination of those was the standard by which pupils were nominated.

The 2009 award winners now joined the ranks of the 555 other Otago school pupils who had won Class Act awards since they were established in 2000.

"Be humble about your achievements, but also be proud, and continue to aim high. As I read recently, `Why strive for mediocrity? There's too much competition'."

"I felt pretty privileged and proud to be a part of this. There are some amazing achievers here across a whole range of things.

"It's nice to be recognised for all my hard work, by no less than John Key."

Waitaki Girls High School pupil Jane McCulloch was impressed with Mr Key's speech because it had "good stories we could all relate to".

"I thought what he spoke about was true."

"He talked about himself, and it was good to see he was actually human. He showed that anything was possible if you put your mind to it."

Seven years ago, the Otago Daily Times Class Act recipients of 2002 were seen as potential leaders.

So where are they now? We have tracked down all 57 and found they are still achieving in a variety of areas.

Most are now in their mid-20s and in the workforce.

Some are still studying, specialising in sectors as diverse as costume construction and volcanoes.

Several are on their OEs, and many more plan to work offshore in the future.

In tomorrow's edition of the Otago Daily Times, these young men and women share what they have been up to, their biggest challenges, and what effect the recession has had on their plans.