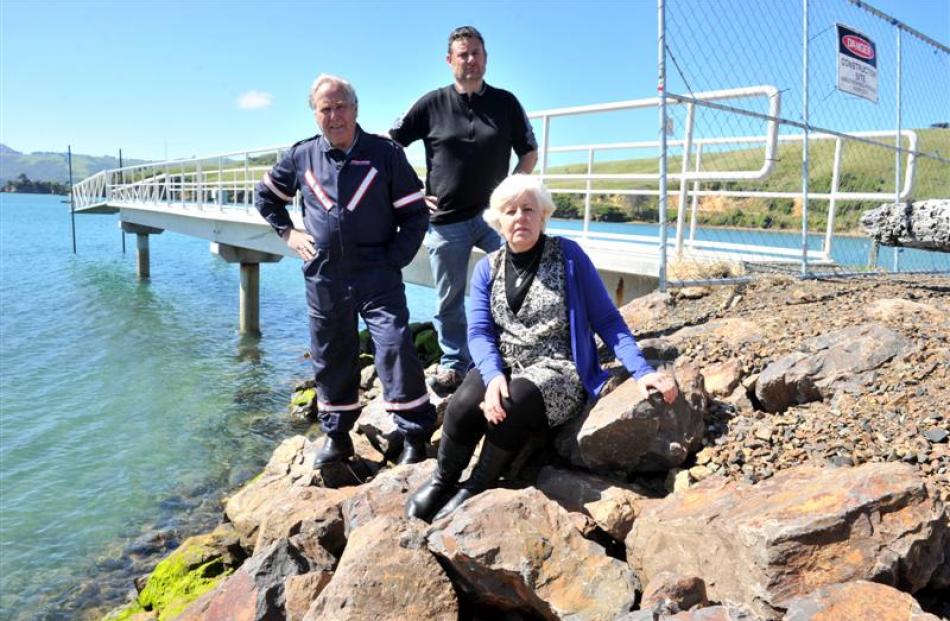 Portobello community representatives and local community board members (from left) Lox Kellas, the Coastguard coxswain; Paul Pope, the chairman of Portobello Community Inc, which raised $80,000 for the jetty and pontoon; and Otago Peninsula Community... 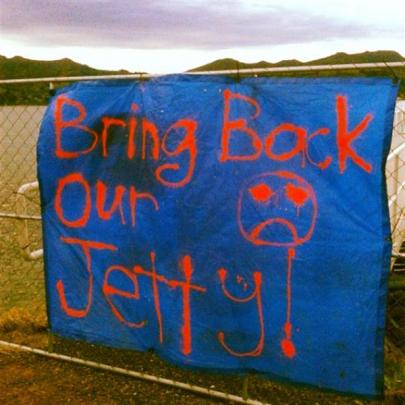 They want the companies responsible for the fault Portobello pontoon's construction to fix it and return it immediately so the community's jetty can be used again. Photos by Linda Robertson/supplied.

An Otago Peninsula community leader has lambasted the Dunedin companies that designed and built the faulty Portobello pontoon, saying it is ''totally unacceptable'' they are not putting the situation right immediately.

''It don't think they fully understand the level of frustration and anger in the community about this,'' Otago Peninsula community board chairwoman Christine Garey said yesterday.

The Dunedin City Council says it is also ''very frustrated'' with the situation.

Mrs Garey said she wanted to let pontoon designer Spiire Consulting (now Calibre Consulting) and principal building contractor Amalgamated Builders Ltd (ABL) and its sub-contractor Action Engineering, know the onus was on them to sort out between them the repair and return of the pontoon to the community before Christmas and at no further cost to ratepayers.

The pontoon, part of a $382,000 jetty project completed in 2012, was towed away for repairs in late August after holes began appearing in it and repeated underwater repair attempts failed.

It was supposed to be back in place in October.

''It is totally unacceptable that it has taken this long to resolve the issue of the fault with the pontoon,'' Mrs Garey said.

When contacted, both Spiire and ABL said they had no comment and referred the ODT to the DCC's parks, recreation and aquatics manager Mick Reece.

Calls to Action Engineering, which was sub-contracted by Amalgamated Builders for its work on the pontoon, were not returned.

Mrs Garey said the Portobello community raised a ''hard-won'' $80,000 for the jetty, which had also required a substantial ratepayer contribution.

The companies ''were happy enough to take the money'', but it was not clear they truly appreciated where it came from.

''These companies have come up short at every turn really. My belief is that if you make a mistake in business, you put it right.

"Making it right is the key thing to this, and they don't seem to be understanding that this is public money and not some unending private source.''

Mrs Garey said she could not fault the efforts of council staff behind the scenes to resolve the matter.

She believed the businesses were the impediment, and they needed to ''put this right'' immediately.

There had been several discussions with them and one formal meeting with the consultant and the principal contractor, with no resolution. Another meeting was being organised.

''What we're saying [to them] is you sort it out and tell us, because at the end of the day it's going to be difficult to tell the ratepayer they have to spend more for something they thought was already fit for purpose.''

The council was reluctant to get lawyers involved because it would cost ''more money that we don't have''.

He understood the work to fix the pontoon could be completed within a fortnight, but said there was a matter of ensuring it was a proper long-term fix.