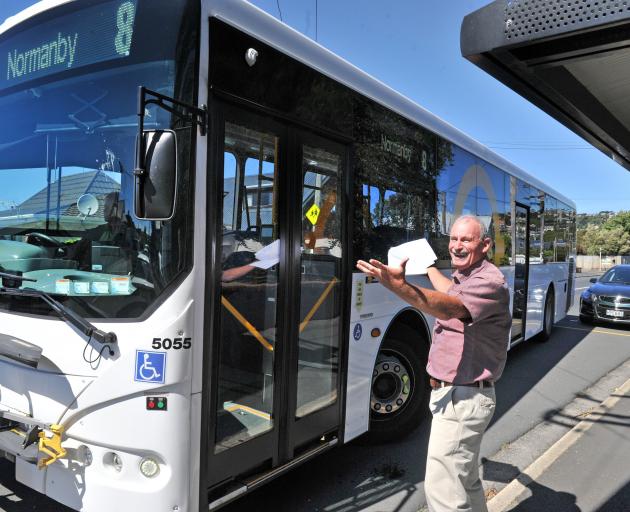 Dunedin Tramways Union delegate Alan Savell shows how a bus is unable to fit in a Macandrew Rd bus stop and comes close to clipping a parked car. PHOTO: CHRISTINE O’CONNOR
Dunedin bus drivers have had to urinate behind bushes or limit their water intake due to a lack of access to toilets, a Tramways Union survey has shown.

It comes as union members also call on the Otago Regional Council and Dunedin City Council to make some of bus stops around the city, which are causing stress to some drivers, safer and more accessible.

Union members are threatening to disrupt services if nothing is done.

A survey, conducted in May last year, asked about 100 drivers from the Amalgamated Workers Union New Zealand (Southern) Incorporated and Dunedin Tramways Union, about their access to toilets while working.

The majority of drivers said they had had to "many times" or "sometimes" urinate by the side of a road or behind a tree while on bus-driving duty and nearly all drivers surveyed had restricted their water intake.

Both councils were provided with the survey results, but the union felt there had been no improvement since and decided to no longer withhold the information from the public arena.

Union members have agreed that from March, when they need to use a toilet, they will stop outside the Dunedin bus depot, offload any passengers, then drive their empty buses into the depot, park and use the toilet facilities provided there.

They would then pick the passengers back up and resume their journey.

If the driver’s route did not pass the depot, the driver would take the shortest diversion to the depot.

Mr Savell said another major issue - which could also see changes to where union member stopped if not resolved - was that many stops were too small for buses to drive in and out of, meaning the bus had to block the road outside the stop.

An example was the stop on Macandrew Rd, near the intersection with Wesley St.

It is one of the several on the street the city council is to consider approving changes to, following a proposal by the regional council.

The stop is 14m long, the length of a bus with a bike rack down, and cars often park close to the yellow lines on either side of the stop, causing stress for drivers, and sometimes resulting in parked cars being clipped or bus drivers being abused by other road users for blocking the road.

It was also an issue for passengers with limited mobility, who often could not get on to the bus as it could not get close enough to the kerb.

Mr Savell said it would be good if the council would fix the problem at the Wesley St stop.

There were about nine other stops with similar issues.

If they were not fixed, union members would, from March, boycott any new or upgraded bus stops that did not meet requirements.

Regional council transport manager Garry Maloney said it was aware of the concerns raised by the union and had been working on understanding the details.

The council would discuss working together to find a solution with those involved in delivering the bus services.

'Trammies' are in the right.

It's up to ORC to avoid 'Did He Ever Return? No, He Never Returned' industrial action.

Mostly solved by reducing the number of bus services to a level that covers the variable/running costs per trip/service. Let us be honest: outside peak times, hardly anyone uses the buses.
An ODT article in late 2018, indicated approx 3 persons per trip for that year. Let us assume all those were full fare adults paying $2 a trip. The DCC/ORC earns $6 per trip that averages 45 mins. A bus driver's cost is at least $20/hour, plus diesel, tyres, wear & tear, admin... Each trip is subsidised by the ratepayers by at least $25 - and that is just variable costs, let alone pollution and destroyed roads due to heavy buses. Why? Most people do not want empty buses and they do not want to ride them. Time to rethink the bus system and make the cuts, so at least a trip's variable cost is covered by the income. Then the number of portaloos can be assessed.

Oh sure. Cuts. Fewer drivers to work under poor conditions and more out of work. Let it be what it is. An industrial dispute.

DCC head in the sand, again with valid concerns from residents.