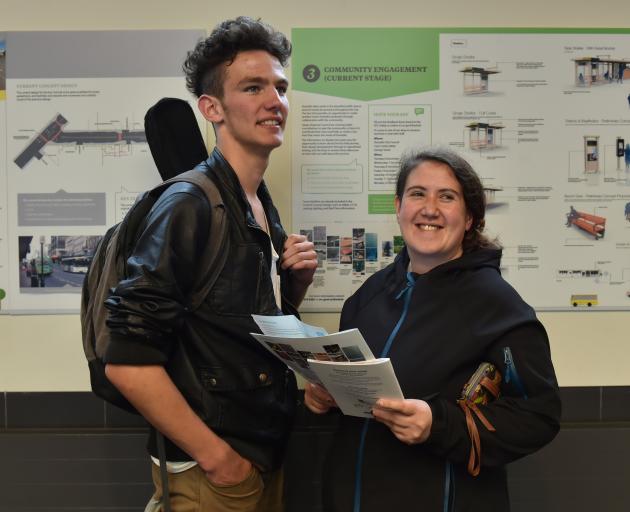 More than 150 people have attended the Otago Regional Council's bus hub ''drop-in'' sessions in the Civic Centre lobby since they started on Tuesday.

Dunedin residents Sharna Milner and Louis Freeman visited the presentation yesterday and both were ''excited'' by the prospect of the city's proposed bus hub, which was also likely to encourage more people to use  buses.

And both were pleased the community was being consulted over plans for the proposed $3 million project, in Great King St, near the central police station.

Physical work on the project site is expected to start mid next year.

Mrs Milner said this was a ''great'' development, and a ''really good change'' towards the kind of bus system operating in places like Christchurch.

Louis, a year 11 pupil at Logan Park High School, said he did not drive and buses were one of his main forms of transport.

A central hub would bring bus services together in one place and the new infrastructure, including bus shelters, would make the bus travel experience ''nicer'', he said.

Mrs Milner, who has been using buses in Dunedin for the past 31 years, urged more people to take part in the ''drop-in'' sessions, and to fill in the hard-copy response forms and leave them at the lobby, or respond to the ORC internet site online.

''I think that people need to have that voice,'' she said.

Further information is available online at www.orc.govt.nz/bushub and there is also an online feedback form.

She preferred design options that gave more extensive shelter for people waiting for the bus, and said that providing ''real time'' information about bus arrival times was important for all bus users.

Seventy people attended the consultation on Tuesday, the first day, and about 50 on the second. More attended yesterday, in the only evening session, which ran until 6pm.

More ''drop-in'' sessions will continue at the lobby each day from 10am to 2pm until Monday.