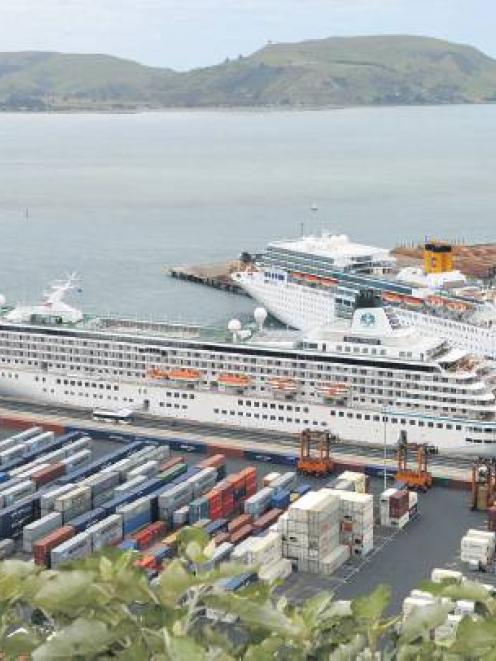 The cruise ships Voyager of the Seas and Crystal Symphony (rear) berthed at Port Chalmers in 2012. The port is running simulations to see if it can handle an even larger class of cruise ship which is expected to be in New Zealand waters in 2017. File photo
Port Otago is planning simulations to see if it can handle the next generation of super-size passenger ships.

Know as the Quantum class, the upcoming giant cruise ships are being built by Royal Caribbean International.

As massive as they sound, the Quantum ships will not be the largest liners on the ocean. Royal Caribbean International already has two Oasis class liners  - Oasis of the Seas, and Allure of the Seas - which can carry about 6000 passengers.

At present, the largest ship coming to New Zealand is Voyager of the Seas, which carries about 3000 passengers.

Port Otago general manager Peter Brown said the cruise company had indicated it was interested in bringing the Quantum class to New Zealand ports for the 2017 season.

In the next few months, Port Otago pilots would be using a computer simulation to determine whether the port could handle the Quantum class, he said.

The simulation would give pilots confidence as to whether they could guide the ship into the harbour and what weather conditions it would be safe to complete the task in, Mr Brown said.

If it was possible to get the ship into the wharves, Mr Brown did not predict any issues in dealing with the increased number of passengers disembarking.

‘‘Let's not get too excited, the largest ship coming to Dunedin already carries 3000 passengers,'' he said.

Enterprise Dunedin business development adviser Sophie Barker said she was confident the city would be able to cope with an increased number of passengers as it had dealt with large numbers on days when there had been two or more cruise ships in port several times in the past.

Last year, the largest number of passengers in port on one day had been 7200, on December 13, she said.