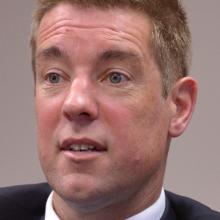 Dan Reddiex
A Dunedin school principal is  increasingly  concerned  by the  social expectations imposed on schools,  and says some parents need to take more responsibility for their children’s actions.

During the recent King’s High School senior prizegiving, rector Dan Reddiex praised his present cohort of pupils for their outstanding achievements  during the year, but went on to express deep concern about the future of education in New Zealand.

He said the school’s ability to educate boys "in mind and in heart" was under threat.

"Alarmingly, in my view, we are increasingly becoming as much a social institution as we are an educational one.

"The expectations imposed upon us now as a school, to attend to and reverse the ills of our society, are completely unrealistic and they are beyond our resource capability.

"It seems now, the first questions about the inappropriate text message sent by a school-age person in the weekend, or the under-age young person attending a party that goes wrong, are not ‘what were the parents thinking and what will the parents do about it’?

"The first questions now are ‘what school does the young person go to and what is the school going to do about it’? And we’ve seen that in the national media this year...

"I believe it’s not our parent body who thrust these expectations upon us. It’s the media and it’s increasingly a broader societal expectation."

Mr Reddiex said the lines of demarcation between parental and school responsibility and accountability had been "completely obliterated".

Following the prizegiving, he told the Otago Daily Times there was an expectation that schools would, in part, fulfil the function that historically had been the role of a parent.

"The vast majority of parents are doing a fantastic job, but there are some who need to take more responsibility for their child’s behaviour."

"Schools are under increasing pressure to help the community solve some of its issues, and often schools are seen as the last place where some of these issues can be addressed.

"That’s not where schools should be. A lot of these issues that schools are being asked to deal with are not internal issues. They are issues that have arisen from outside the school."

Among other concerns aired by Mr Reddiex during his speech were the Ministry of Education’s push for more open-plan teaching spaces and the increasing use of digital devices in classrooms, which he believed were not as effective as classrooms with walls and good teachers dispensing information.

He said the education sector was also in danger of losing its passion for teaching and learning in New Zealand, because of its "repetitive and relentless" "assessment-driven" education system.

"I believe there are some dangers looming, and some that have already surfaced that threaten the remarkable school that we’ve cultivated, and beyond that, education in our country as a whole.

"We are in a fight. It’s a fight to preserve our purpose, our profession and our passion.

"And we can’t afford to turn our backs," he said.

I agree with all of that. I signed up to teach knowledge and skills. That is what I trained for. I am not a therapist, parent, or social worker. I am not trained or experienced in those roles. Yet as Dan points out I am increasingly expected to fill aspects of roles like this.

We face a teaching shortage and amongst the reasons are the ever growing list of things teachers are expected to do. Many of these things we are asked to do without the training, time or resources to achieve them. For years teachers have been expected to be expert sports coaches, to give up their break times, weekends, and after work time to take practices and tutorials. These things exist outside of our paid responsibilities. Add to this the social load Dan refers to and the job is often too hard. We have too few young people becoming teachers. Less than 9% in secondary education are under 30. Younger people know how tough things are in schools, not having been gone too long.

Social responsibility is a parental and societal issue. It is not a school issue. Schools are employed by Government, easily sent directives and more easily blamed.

Society needs to let us teach. We cannot do everything well.

Schools are part of society. They have a role to play here whether Mr Reddix likes it or not. But then perhaps we should not be surprised that a single sex school like Kings is struggling to fulfil this expectation--half of society does not pass through its gates. So, Building Men for, well, half of Life.