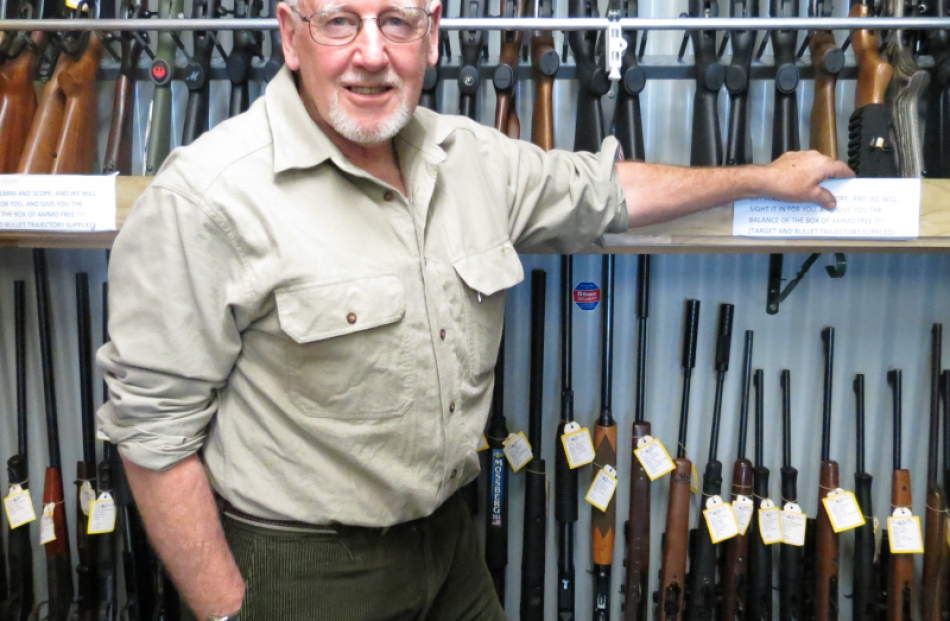 Gun shop owners in Dunedin say the private sale of firearms in Dunedin is ''thriving'' and tougher restrictions need to be introduced to try to combat the problem.

There are ''approximately'' 35,000 gun licence-holders in the Southern District, according to Dunedin police.

Centrefire McCarthy's Streamand Field Store managing director Selwyn Shanks said since the registration of individual guns was revoked in 1984, many people had chosen to trade guns privately as they could make more money - and the internet was adding fuel to the fire.

''If you bring your dad's old gun in to me to sell and I offer you $250 for it, but someone down the pub without a licence offers you $300, you're going to go with the better offer,'' he said.

''Otago is a rural area so there is a lot of informal trading and sale between farmers. We have no idea how many guns are out there, or if the people who have them know how to use them.''

The National Centre for Peace and Conflict Studies chairman and director Prof Kevin Clements said there were 230,000 registered gun owners in New Zealand - but an estimated 1.1 to 1.2 million firearms. He agreed the black market in gun trading could be ''thriving'' in Dunedin and Otago because of the rural make-up of the community, and the strong interest in hunting.

''We do not know how many guns each registered gun owner possesses,'' Prof Clements said.

''Some must have mini arsenals while others will just have one weapon. Not knowing who owns these weapons is a major problem.''

One gun retailer in Dunedin, who did not wish to be named, said even though he was in the business of selling guns and ''business was good'', he believed every gun in New Zealand should be individually registered and a gun amnesty - where unlicensed gun owners surrender guns without repercussions - ''couldn't hurt''.

''Private gun sales are a huge problem,'' he said.

''Over the internet, or a mate talking to a mate down at the pub, nine times out of 10 they won't ask to see a gun licence. And when someone messes up we all cop the flak.

''If things are going to get sold on Trade Me you should have to go to your local gun shop to pick up the gun, and the owner will then sight your licence, or [go to] the police station to uplift it. But the cops don't want to know. If a gun shop is doing their job they won't buy a gun unless they sight the owner's gun licence, but many don't bother because there is money to be made.''

Mr Shanks said 98% of his customers were male, and he ''occasionally'' refused to serve a licensed gun owner if they seemed ''disturbed or strange'' - but making such a judgement call was tricky. Another gun retailer said he regularly refused to sell guns and ammunition to licensed gun owners because of ''the way they look''.

''I get people in here who are shaking, who are [drunk], whose eyes are rolling all over the place and I'll flat out refuse to serve them. Yeah, they bitch and moan, but I don't care, they've got to deal with me. You have to refuse. Guns don't kill people, people do.''

Another long-time Dunedin gun user who wished to remain anonymous said it was harder and more expensive to acquire a driver's licence than a gun licence. He thought a month-long test should be introduced to ensure gun owners could safely operate a gun, store it securely and hit a target.

''The private trade in guns is kind of out of control, especially in Dunedin.''

Acting Otago coastal area commander Inspector Mel Aitken said private gun sales, especially internet trading, was not a current priority for Dunedin police as they had not been made aware of any particular issues.

''You don't know what you don't know, we just deal with [gun control] on a case-by-case basis.''

- Private sales of firearms are legal, but the buyer must have a NZ Firearms Licence. Selling a gun to someone who does not have a valid licence carries a maximum penalty of $1000 fine or three months in prison. The onus is on the seller to check the buyer has a current licence.

- Internet sales are subject to Section 43a of the Arms Act 1983. Information on this is available from any police station.

- Anyone who buys a gun without a licence can be charged with unlawful possession of a firearm, which carries a maximum penalty of a $5000 fine or four years in prison.