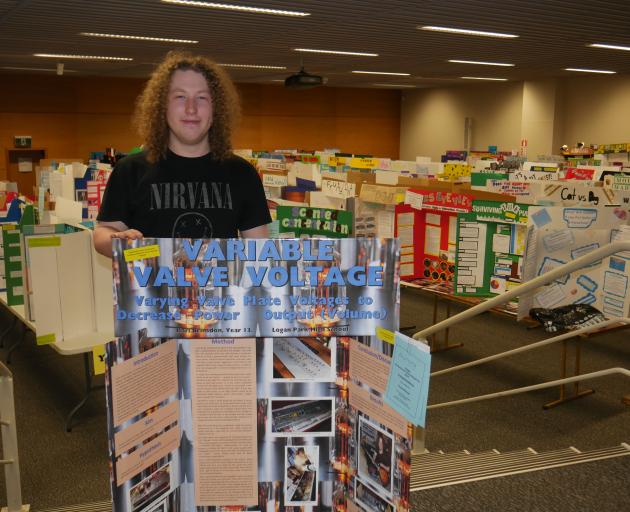 Logan Park High School pupil Karl Brinsdon (17) shows off his project at the Science and Technology Fair in the Hutton Theatre at the Otago Museum. PHOTO: JESSICA WILSON

A Logan Park High School pupil says his projects for the Science and Technology Fair have got progressively "bigger and more complex'' over the six years he has entered the competition.

This year's entry marked Karl Brinsdon's sixth and last in the competition.

He received the Dodd-Walls Centre for Research Excellence Award for Physics Related Projects and an Aurora Award for Excellence in Energy Research for his project based around a guitar amplifier.

The year 13 pupil aimed to build a valve amplifier with a control to lower the internal high voltage as a way to decrease the overall power output and volume.

Karl has been playing guitar since he was about 5 years old, so wanted to incorporate something he enjoyed in his project.

Sourcing parts for the amplifier took the longest, as most of them came from the United States, Karl said.

"The most important part of it was the valves.''

While he did not want to think about how much the project cost him, "the end result is definitely worth it''.

"It's so cool to have something that I have made. It's unique as well.''

He enjoyed the fair because it was a "good excuse'' to challenge himself to create something new.

It gave people the opportunity to learn about something they were passionate about, which might not be a focus at school.