Protected buildings may be demolished 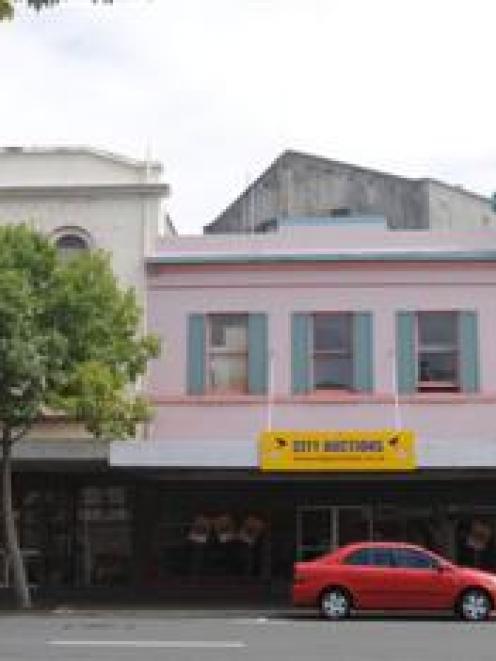 These buildings in Princes St, Dunedin, are one step closer to demolition. Photo by Peter Mcintosh.
A group of Dunedin buildings may be demolished after a Dunedin City Council hearings committee indicated it was "of a mind" to give approval to developers.

An interim decision on the Princes St buildings has been criticised by heritage advocates.

• Poll: Should the historic Princes St buildings be demolished

Christchurch developer Luke Dirkzwager has been told by one councillor to go back to Christchurch and "desecrate that".

While the final decision on demolition of 372-392 Princes St has not been made, an interim decision from a resource consent hearings committee said it was "of a mind" to grant consent if Mr Dirkzwager's company, Prista Apartments, came up with a new design "more representative of the character of the precinct".

[comment caption=Do you think the Princes St buildings should be demolished? Or do you agree with the heritage advocates? Send us your views.]Mr Dirkzwager has been seeking approval since 2008 to demolish the buildings and replace them with 15 apartments, with space for retailing on the ground floor.

The development is a non-complying activity under the council's district plan, as the area is in a protected townscape precinct.

It attracted strong opposition when first proposed, with 260 people signing a petition, and opposition from the New Zealand Historic Places Trust.

Last year, the developer was asked by the committee of city councillors, Colin Weatherall, Richard Walls and Fliss Butcher, to come back with a new proposal, but its modernist design has not been accepted.

An interim decision released yesterday requires the developer to provide an alternative design by July 1.

A final decision on the consent, followed by an appeal period, would follow, and until that time, no work could start.

Cr Weatherall said the advice to come up with a design more representative of the area's character was the only advice the committee would give the developer.

Mr Dirkzwager could still come back with a design that kept the facades, but during the hearings, Mr Dirkzwager argued that was not economically viable.

The buildings are owned by Copthorne Holdings.

Mr Dirkzwager said yesterday he would return with a new design, and "time would tell" if he could find something acceptable.

Heritage advocate Elizabeth Kerr, who presented submissions during the resource consent process, said the building was supposed to have protection under the district plan.

It was too soon to consider whether to appeal the decision before the Environment Court, she said.

Historic Places Trust Otago Southland area manager Owen Graham said there was little to comment on until the final decision, and the committee's reasons, was released.