Protesters have made makeshift structures and are blocking the entrance to Ravensdown fertiliser plant in Dunedin this morning.

About 15 protesters gathered at the two entrances to the plant in Ravensbourne about 9am and police arrived at the scene not long after. 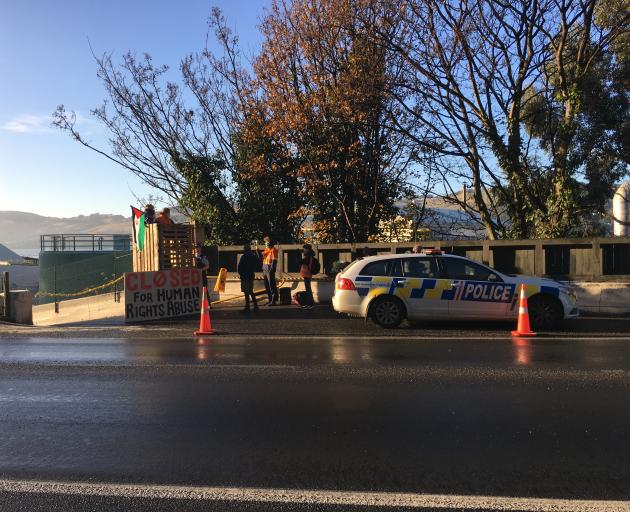 Protesters constructed a makeshift structure. Photo: Emma Perry
The group were protesting Ravensdown's continued importation of phosphate from the disputed territory of Western Sahara, which Morocco is accused of illegally occupying.

The protesters are blocking the entrances and have made makeshift wooden structures to make it harder for them to be moved on.

Ravensdown Group communications manager Gareth Richards confirmed it was receiving a shipment of phosphate rock from Western Sahara "which the UN designates as sovereignty undecided".

He said the shipment was estimated to arrive later next week depending on tides and unloading times.

"As an essential service, Ravensdown is working hard to help farmers grow the food for export that earns the dollars that subsidise NZ’s social and economic recovery.

Environmental Justice Otepoti spokeswoman Abby Spilg-Harris said in continuing to purchase and import the phosphate Ravensdown were financially supporting the continuation of a military occupation of Western Sahara, and oppression of the Saharawi people.

"118 countries recognise this as a gross human rights abuse but we still don't."

Time to charge up the taser...

Good enough to allow protester to occupy at Ihumatao up north for a year and still there, so can't see why police or anyone else cold substantiate moving these people on.No damage done to public statues by this group because that ok for some.Think they should build structures to live in because others have, and still there.But then again that about ethnic issues.