A crowd of about 150 supporters of the rainbow community gathered in protest against the Speak Up For Women talk in Dunedin on Saturday. PHOTO: GREGOR RICHARDSON
Protesters outside the Dunedin Centre outnumbered the crowd inside about five to one as Dunedin’s rainbow community rallied to denounce a contentious women’s group speaking in the city at the weekend. 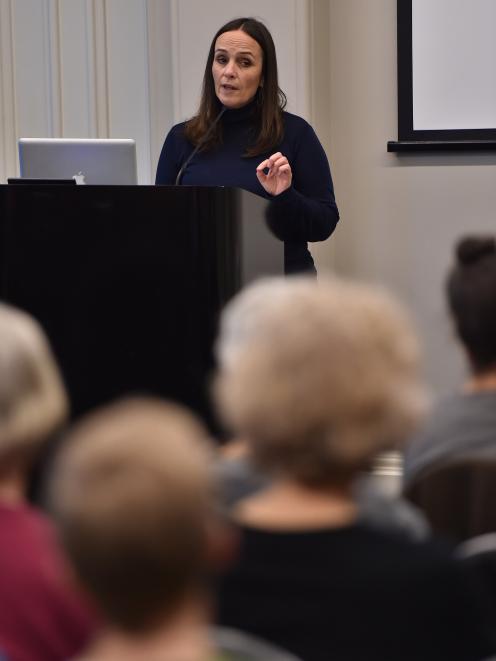 Speak Up For Women organising committee member Daphna Whitmore, of Auckland, speaks to a crowd of about 30 in Dunedin on Saturday. PHOTO: GREGOR RICHARDSON
Addressing the crowd outside Saturday’s Speak Up For Women talk in Harrop St, Environmental Justice Otepoti organiser Scout Barbour-Evans said the group was upholding a long-standing tradition of fighting against transgender rights.

The speaking tour in Dunedin at the weekend was addressing the Births, Deaths, Marriages and Relationships Registration Bill, making its way through Parliament.

But the group promoting the talk was "actively campaigning against transgender rights", the protest organiser said.

The crowd of about 150 outside cheered, carried signs, and offered biscuits to supporters.

Among them, Dunedin city councillor Jim O’Malley said he was there to support inclusion and acceptance.

Taieri MP Ingrid Leary said a lot of the angst around the issue was fear-based, and there was nothing for people to be scared of.

"Some of the discourse around trans women qualifying for the Olympics, that kind of thing, it’s based on fear.

"It’s 2021 and I think the conversation would have moved on by now."

Inside, the smaller crowd appeared to be on average older than the protesters outside.

Those who were there to listen to the talk had to pass several security guards at the front doors, and several more on the way into the second-floor conference room.

Her group of self-described gender critical feminists is against the proposed law change to make it easier for people to change their sex on birth certificates.

She called for public consultation before the law change.

And she said she was disappointed people outside were using the term "terfs" to describe those inside.

(The word is used to describe a feminist who excludes the rights of transgender women from their advocacy of women's rights.)

"Our view is that sex matters sometimes and that this piece of legislation redefines what a woman is.

"It’s going through without consultation and our fight has been to have it go through the proper process where the public will be able to submit and highlight shortcomings or concerns that we have."

The group Speak Up For Women was formed to oppose the Births, Deaths, Marriages and Relationships Registration Bill.

The Bill will have its second reading in Parliament next month.