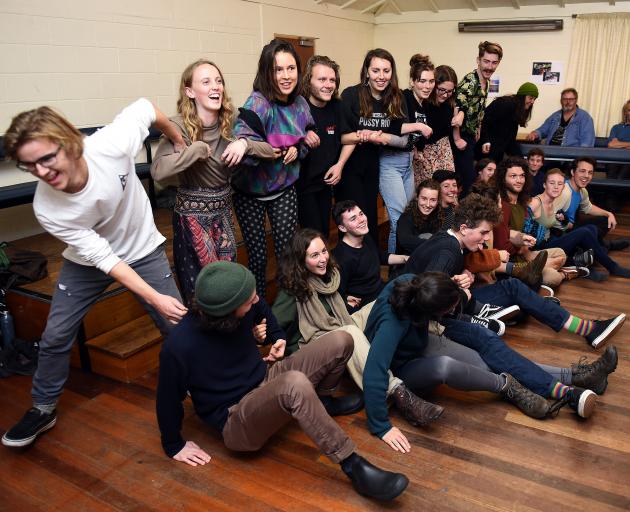 Members of an environmental group go through an exercise at Knox Hall during a training session for a planned protest at the New Zealand Minerals Forum. Photo: Gregor Richardson
Mining representatives can expect everything from chants to human blockades when environmentalists attempt to shut down a Dunedin conference this month.

Yesterday a coalition of environmental groups held a training evening in preparation for a planned protest on May 28 during the three-day New Zealand Minerals Forum at the Dunedin Centre.

Protesters hope to stop the forum for what they see as the negative impacts of mining, especially the carbon emissions of coal.

At the training evening participants learned ''non-violent direct action'' including how to create human blockades and what their rights were if arrested.

Extinction Rebellion member Abby Spilg-Harris said one of the reasons for the evening was to teach attendees how to be safe and look out for the people around them during the protest.

There would be a wide range of what people would be comfortable doing in terms of direct action, she said.

''There will also be people giving out food and playing music. We're there to say no and there are lots of different ways to do that.''

They did not want to be arrested, but this was not necessarily in their control, she said.

Non-violent direct action was needed ''more than ever'', she said.

''It's a legitimate activity and an important activity.''

However, there would be ''unintended consequences'' if the demand for products of mining was left unfilled, he said.

''Mining and minerals are essential to everything we do in modern society. You try running life without mining, see how you go, buddy.''

Any of the protesters were welcome to speak to him about their concerns.

'Try living your life without mining. See how you go, buddy'.

Not from round here? Exploitative industry has been a death trap on the West Coast.