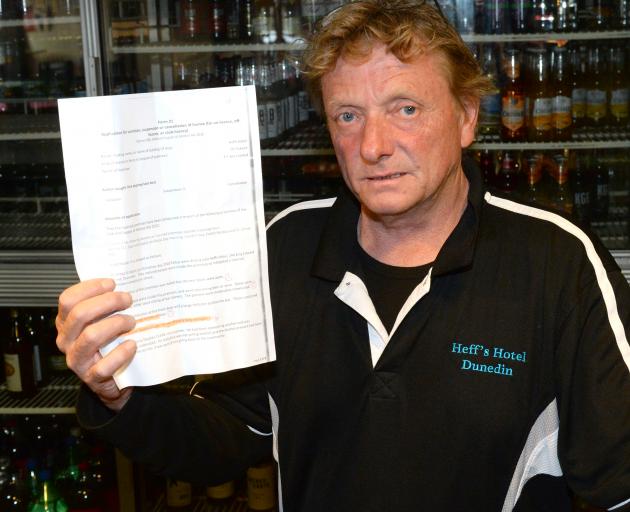 The notice was filled with "utter lies", including that no food was provided, Mr Clark said.

"There was more food here than we could poke a stick at."

The dinner was his way of giving back to his customers, some of whom had nowhere to go on Christmas Day.He asked for a $20 donation, but those  who could not afford it were not charged anything.

"It’s not a money-making thing. I lose money every year on it."

The bar was closed at the time and people who came brought their own alcohol, with none sold from the bar.

"To me, it’s completely unfair."

He vowed to fight the case when it goes before the Alcohol Regulatory and Licensing Authority.

"Normally I roll over, but this time I’ve done nothing wrong."

Two of the people were at the event stood by Mr Clark’s version of events.

Sammy Smith, of South Dunedin, said he brought along half a ham, there was plenty of food and people brought their own alcohol.

Margeret Thompson, also of South Dunedin, said she had nowhere else to go on Christmas Day.

"I came here for the company."

Sgt Paulin said they were not trying to shut down the bar  and had made the application based on what police found on Christmas Day. He would not comment further because the matter was before the courts.

"He’s been through that process many a time. He knows the system."

In 2011, Heffs’ on-licence was suspended for three days for what was labelled "appalling" aggravated alcohol abuse.