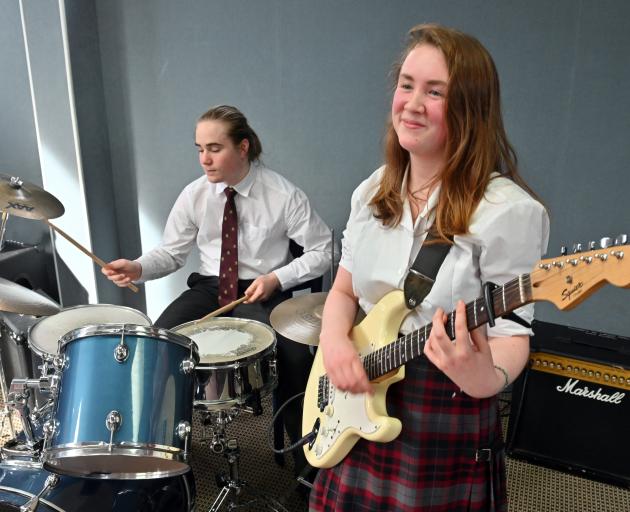 Logan Park High School musicians Mathew Schack and Melicen Barber rehearse one of their latest compositions. Photo: Linda Robertson
It seems to be the gift that keeps on giving.

Logan Park High School's performance at the inaugural Otago and Southland regional heat of the New Zealand Showquest competition in May has won another award.

The school won the regional heat, and now, a song performed live to accompany the show has won the live music award in the national final.

The song, Dandelion Devout, was written and performed by Melicen Barber (16) and Mathew Schack (15).

The Logan Park duo only found out they had won the national award yesterday because, in a bid to save costs, the regional winners send recordings of their regional performances to a judging panel, which determines the overall national award winners.

Melicen said the lyrics of their song painted a visual picture, rather than telling a story.

"They are intentionally vague. The song is open to interpretation.

"Our music is like alternative rock, indy - it's a fruit salad of sound."

It is not the first time they have had success in music competitions.

The song won the award for best lyrics at the 2018 Smokefree Rockquest Otago, and their band Paper Frogs was runner-up at this year's Rockquest.

They were delighted with their latest award.

Melicen said it was growing their confidence, and they were now starting to feel like good song writers.

"It's nice to have our performances recognised on more of a national level, instead of just in Otago."

Mathew said they were now working on an album, but a release date had not yet been confirmed.

Showquest allow pupils from years 1-13 to showcase their skills in music, drama, dance and art by creating, producing and performing an original theatrical production using pupil-designed and constructed costumes and props, presented in a choreographed, themed mini-spectacular.