By John Lewis
0 Comments
Life is never dull when you have someone like Kaitrin Mcmullan living in your street.

Inspired by all the teddy bears propped up in the front windows of houses around the city, the professional storyteller decided to do something a little more animated.

She has set up Two Metre Tumeke Theatre — a lively puppet show for children in her street to watch from her front fence — and it has already proved to be very popular.

"Our window is only three metres from the front pavement, and because of the teddy bears thing, I thought it would be really cool to have a talking teddy bear."

She said each show was about two minutes long and was in both English and te reo. 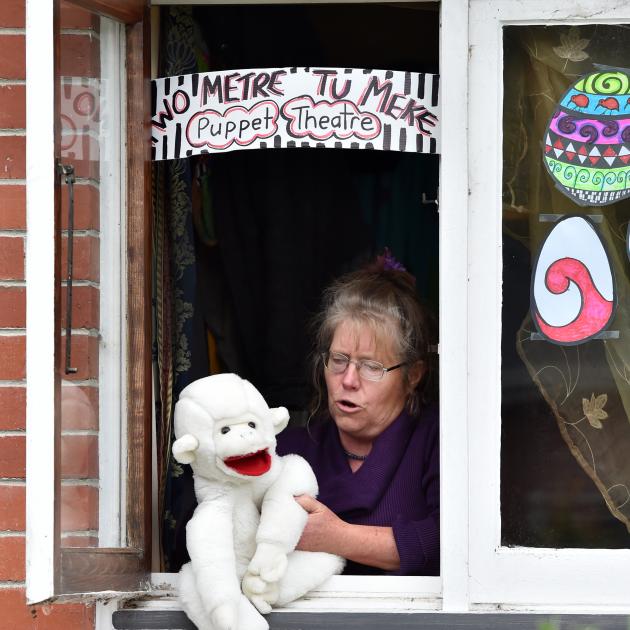 Kaitrin Mcmullan puts on a puppet show for children passing her North East Valley home. PHOTO: PETER MCINTOSH
The shows were not performed at set times. Rather, the children had to book a time by texting her when they planned to go past, and she would rush to the front room and do the show.

She said it ensured the audience was more than two metres away on the footpath, and only one bubble watched at a time.

Some of the children had now started singing songs outside her house to see if they could make the puppets dance, she said.

"It’s to give the kids something to look forward to as they walk up the street."

Although the puppet show is only for the children in her street, Ms Mcmullan said it could be spread further afield.

She was encouraging people in other streets around the city to start something similar.