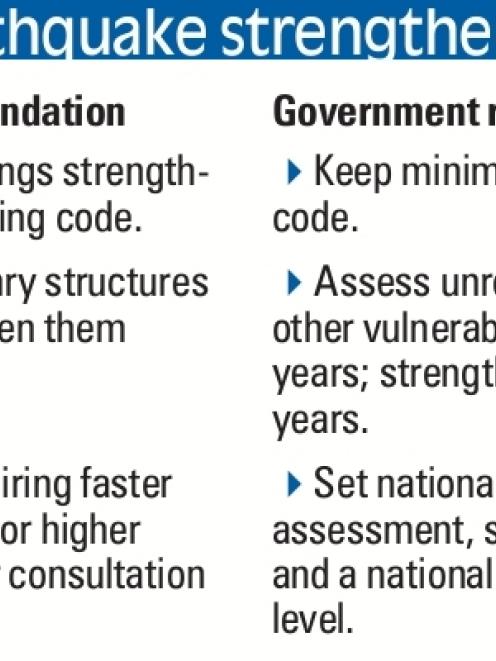 Click to enlarge.
A government proposal to check nearly 200,000 buildings in New Zealand for earthquake risk could drive up costs and mean Dunedin heritage buildings are abandoned, the Otago Chamber of Commerce fears.

The Government proposal - released in a consultation paper - would require all non-residential buildings and high-rise, multi-unit apartments in New Zealand to be assessed for earthquake risks within five years.

The results of the assessments would be made public.

Any buildings found to be at risk of collapse would have to be strengthened - to 33% of building code requirements - or demolished within 15 years.

That would affect about 193,000 buildings throughout the country, of which about 15,000 to 25,000 were estimated to be at risk of collapse in a moderate-sized tremor.

Mr Christie told the Otago Daily Times the proposal would send ''worrying signals'' through Dunedin, which had one of the country's largest stocks of old heritage buildings, but not the economic growth to help fund improvements. The 15-year time frame would be ''reasonably short'' for building owners.

''That will be a time frame I think would be difficult for a lot of building owners to comply with.

''We have got some pretty difficult issues we are going to have to face,'' he said.

Already, one heritage building, the Dunedin Courthouse, had been all but abandoned because of earthquake risk, and the Ministry of Justice could give no assurance of a return.

More problems could follow as the owners of Dunedin buildings abandoned or demolished their properties rather than meet the cost of upgrades, Mr Christie feared.

''I think that's potentially a position we could find ourselves in. I'm fearful we are seeing a lot of knee-jerk reaction ... we have to be careful.

''Common sense can be lost in some of these debates,'' he said.

Building and Construction Minister Maurice Williamson said the recommendations in the report could have significant economic consequences for building owners. But he stressed the Government's proposals would strike a balance between increasing safety and managing the economic pressures of strengthening and removing vulnerable buildings.

That policy required owners whose buildings were found to be less than 34% of code requirements to upgrade.

Owners had between 15 and 34 years to do so, depending on the state of their building, meaning some would face shorter timeframes under the Government's proposals than they had expected, but not extra costs, he said.

The most earthquake damage-prone buildings had faced the shortest timeframes anyway under the council's policy, he said.

The council had warned owners of the possibility timeframes would be reduced from 34 years, Dr Hazelton said.

The council's own buildings - including the likes of the Town Hall, Municipal Chambers and Railway Station - were already having their earthquake strength tested, council city property manager Robert Clark said.

That work began early this year and up to 30 written reports on individual buildings were expected by mid-next year, he said.

Some, such as the Municipal Chambers, had already been strengthened, while others, like the Railway Station, were considered to be of sturdy construction, but were being checked, he said.

Results were yet to be made public, but buildings appeared to be ''measuring up at the moment'', reaching 66% of the building code or even better, he said. The council already faced extra costs, having initiated its own checks, but it was ''appropriate'' to do so and ensure the health and safety of staff and the public. He expected the checks would meet the requirements of the Government proposals, although detailed information was yet to be received.

Mr Clark doubted buildings would need to be abandoned or demolished.

The Government had adopted many of the Royal Commission's recommendations, but opted for longer timeframes and lower minimum standards than the report proposed.

Making the timeframes too short or ramping up the minimum earthquake-proofing standards would lead to ''catastrophic'' increases in costs to property owners, Mr Williamson said.

The commission recommended that earthquake damage-prone buildings should be strengthened to 50% of the building code - up from the current threshold of 33% - but the Government proposed leaving it at 33%.

Increasing the threshold to just 34% would cost $700 million more over 15 years, he said.