Quarry debate digs deep into past 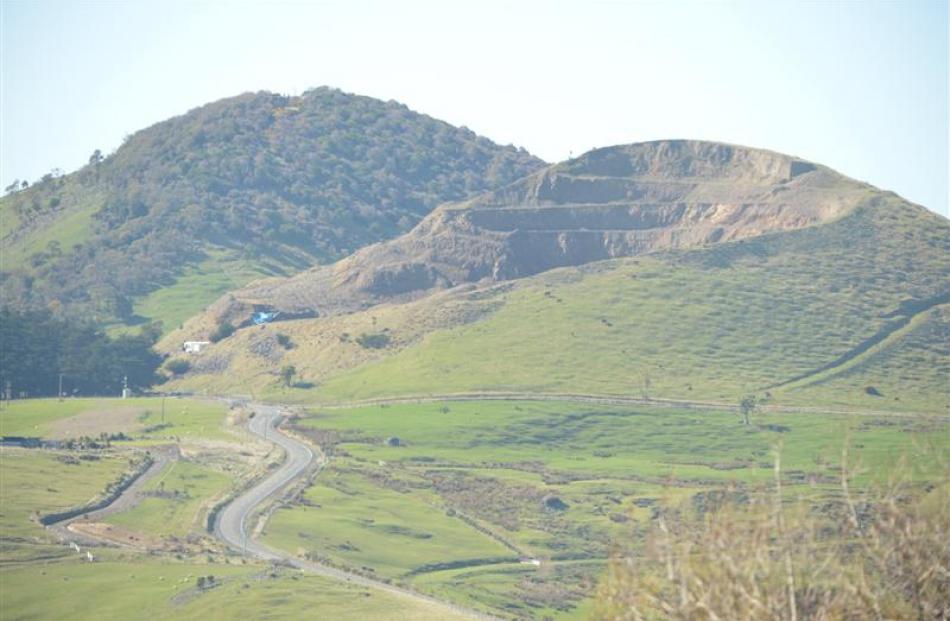 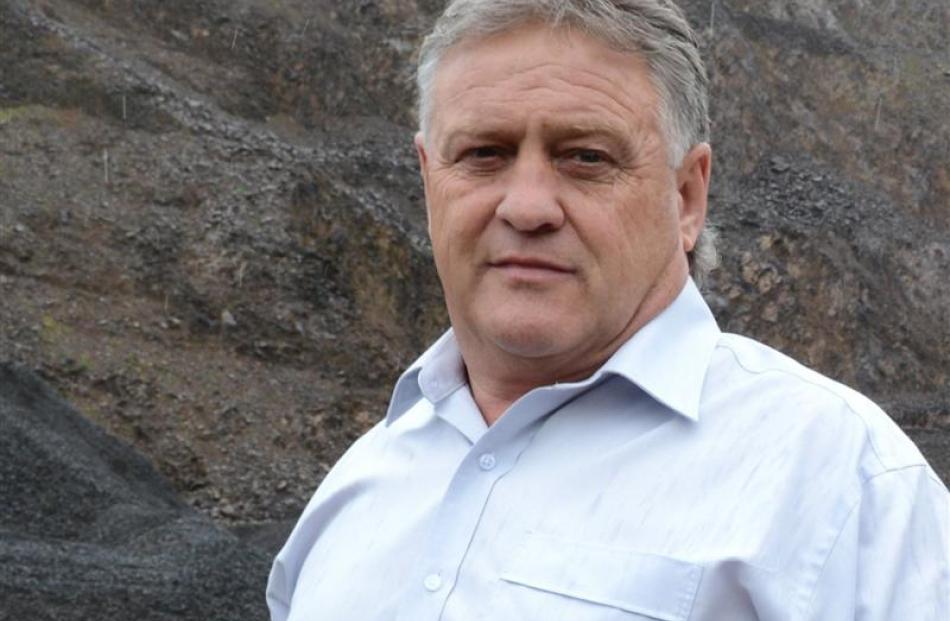 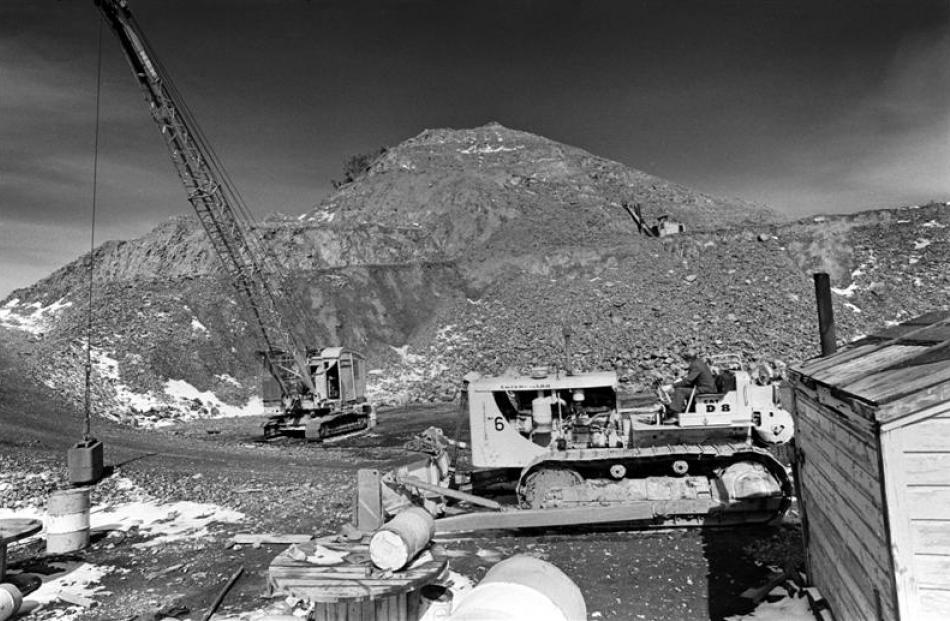 large-scale quarrying on the hill in 1969. 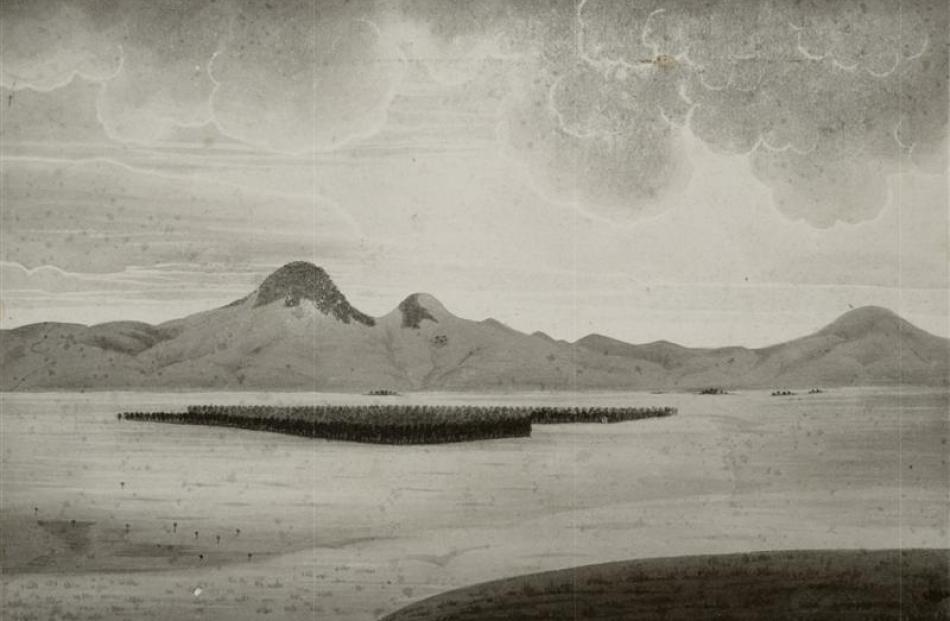 The debate over quarrying on Saddle Hill is intensifying, but it is not without a sense of deja vu. Debbie Porteous takes a look at a gravel pit that has generated almost as much debate as stone in the past 50 years.

If there is any doubt about the historical significance Cook's journal gives Saddle Hill today, there can be none to the people living around its slopes.

To them the double humps south of Dunedin remain a natural treasure and a defining landmark.

But a quarry is gnawing away at the lower hummock, Jaffray Hill, and how much more it can, and should, take is exercising the best legal minds.

Not for the first time since quarrying began on the hill in the late 19th century, the community is up in arms.

Quarrying on the hill - named after an early landowner - was relatively minor until 1960.

Then Downer began extensively working the face visible to the Taieri Plain.

That continued for 20 years as stone was used in infrastructure projects, including the Momona airport, the flood-free highway at Henley and the Southern Motorway through Dunedin.

A 2013 Environment Court decision notes ''a cycle of exploitation of the quarry by local authorities when it suits them''.

Calvin Fisher, the sole director of quarry owner Saddle Views Estate Ltd, which bought the land in 2002, suggests the hill's shape changed most significantly in the 1960s-'70s, when much of the top was knocked off.

As quarrying intensified so too did community feeling.

In the 1960s individuals appealed unsuccessfully to local bodies and the Government to stop the quarrying, but were told it was private land, and nothing could be done.

Ministerial inquiries were made in the early 1970s and, in 1974, a local ''action committee'' gathered more than 4800 signatures for a petition to the Government, asking it to buy the hill and save it.

Officials were sent from Wellington to Dunedin to speak to the quarry's owners and local authorities.

Ultimately, it was concluded that saving it would be difficult.

The land was privately owned and the quarrying permitted.

It could only be saved by buying the land and paying considerable compensation to the land/quarry owner.

The position was summarised in a letter from Minister of the Environment Whetu Tirikatene-Sullivan, who said in November 1974 she could understand residents' angst and she, too, would like to see the profile protected, but it was neither sensible, nor feasible for the Government to stop the quarrying.

''... the land is in private ownership, the owner has been quarrying for many years with the full authority of the county council, and is quite within his rights to continue quarrying''.

''The outlay which has been involved for him represents a most substantial investment.''

The only way of meeting the petitioners' request that the hill should be set aside as a reserve would be for the land to be acquired, she said.

''The Government cannot undertake purchase of the land, and it is my understanding that neither the Taieri County Council nor the Mosgiel Borough Council would wish to become financially involved in any proposition to acquire the land.

''Reluctantly, I have concluded that acquisition of Jaffray Hill to safeguard the historic saddle profile is simply not a practicable proposition.''

The issue went relatively quiet after that, though concern and resentment bubbled to the surface from time to time.

The hill has some significance to local Maori - the legend is that the hill is the remains of a taniwha called Meremere - but there has been no interest in it so far from that quarter.

Landowners and quarry operators, including members of the Scurr family and more recently Mr Fisher, of Saddle Views Estate, which is owned by the Amalgamated Workers Union, have over the years sympathised with the community.

But they have stressed the quarry is a private enterprise, that they have a responsibility to employees, and that economic considerations, like the need for cheap road material, should be acknowledged.

Mr Fisher says any other view is naive to commercial realities.

''I'm just getting about our private business, on behalf of a substantial organisation that I convinced to invest in Dunedin, and we're not about to relinquish those interests and risk the long-term stability of our employees and our customers.''

The debate was reignited in 2008 when the Mosgiel Taieri and Saddle Hill community boards asked the council to investigate residents' ongoing concerns about protecting the hill.

Since then, the council and Saddle Views Estate have been to court twice.

As it stands, ratepayers have spent $181,000 on legal fees, and the company probably significantly more, to arrive at the unusual position where the High Court has ruled the quarry is operating legally, with consent, but the extent of the consent - how much rock is allowed to be dug up - is unknown.

It will be a tricky matter to reach agreement on, given the thorny debate that has dogged the quarry's history.

The hill is significantly altered over next 15 years. Concerns about quarrying surface.

Taieri County Council inquires as to how it can restrict excavation, but is told it is consented and there is little it can do, other than appeal to operator to stop.

1966: Taieri resident R. Smellie writes to Minister for Lands, R. G. Gerard, who says Government can do nothing as property is in private hands.

1974: May, ''Save Saddle Hill Action Committee'' formed. September, 4800-strong petition from Mosgiel community presented to Government asking it to buy and save the hill. November, Minister of the Environment concludes neither practical nor sensible for Government to save hill.

2010: Delta contract ends. Tekapo Investments leases quarry and continues to operate it on a project-by-project basis. DCC can find no documentation on its files proving the quarry's existing rights.

2011: DCC seeks a declaration from Environment Court on existing use rights.