Dunedin physiotherapist Barbara Anderson sits on the side of the physiotherapy pool. She has appealed for the pool to be protected in the Dunedin Hospital rebuild. Photo: Gregor Richardson.
The Otago Therapeutic Pool Trust and the Southern District Health Board are at odds over which entity is supposed to be maintaining the pool while its long-term fate remains in limbo.

The Ministry of Health ordered the deferral of a long-planned pool upgrade after it took over the Dunedin Hospital rebuild last year. The pool site might be used for the build.

Before that, the SDHB had agreed in principle to negotiate a long-term lease, but everything is on hold now.

Trust secretary-treasurer Neville Martin said the pool pays $140,000 per year to SDHB and it is supposed to include maintenance.

Mr Martin did not know when the pool trust would be given certainty about the pool’s fate.

Dunedin physiotherapist Barbara Anderson, who raised more than $29,000 for the pool in a fundraising dance last year, has appealed for the pool to be protected.

The dance was part of a community fundraising effort backed by the Otago Daily Times that raised $1.2 million.

Mrs Anderson wrote a letter to the ODT about her concerns.

"We also cannot let this facility deteriorate any further — there is currently wilful neglect of the building occurring since the SDHB pulled its maintenance schedule, which is now glaringly obvious. It used to do a thorough review and repair at the end of each year, but that has clearly been withdrawn."

Mrs Anderson said the pool should be factored into the hospital redevelopment.

"Please ensure that the architects and health administrators walk in the shoes of their community and patients before making a decision from afar that will affect us all in the next decades.

"The building is sound and the resource is essential for so many.

"Let’s stand up, Otago, and ensure this wonderful pool is kept regardless of the shape of our essential hospital/university rebuild and land swap plans."

A tentative suggestion of a land swap between the University of Otago and the SDHB to enable the build on areas owned or part-owned by the university was revealed by the ODT last weekend.

But as with decisions about the pool, any decision over a land swap resides with the Ministry of Health and a politically-appointed governance group.

Mrs Anderson refers clients to the pool, but because of an injury, she has been using it herself.

"This year I find myself with bilateral tibial spine fractures with significant soft tissue damage of both knee joints thanks to a faulty ski binding, which has left me using a wheelchair and crutches over the last seven weeks.

"It has been a challenging time, but thanks to the physio pool, I have been able to commence my physio/ACC return to work rehabilitation programme there, and am making exceptional progress.

"Without the 35 degrees of warmth in the pool, my joints would not want to move with the same ease, and the whole process would be so much more uncomfortable," Mrs Anderson’s letter says.

The ODT asked the SDHB to respond to Mrs Anderson’s letter, and in particular, to  the suggestion that maintenance had been dropped.

SDHB interim chief executive Chris Fleming, in a statement, said the pool trust was responsible for maintaining the pool and surrounding building.

"Southern DHB recognises the value placed on the physio pool by the community and appreciates the efforts of the many people in supporting the facilities they care about.

"Planning is still in the early stages, with  Southern DHB staff and health planners currently developing  models of care on the basis of expected demographic change in the district.

"With an ageing population, rehabilitation and older persons’ health is very important, and provision for appropriate therapeutic facilities will need to be considered," the statement says.

Writers’ group speaks up on vandalism

‘What a year’: polytech graduation goes ahead at last 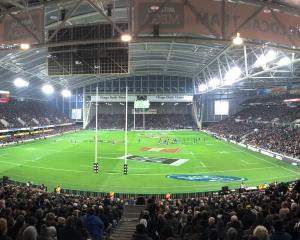