Rail trips back on track

Scenic train trips from Dunedin will be trialled this summer to test whether domestic tourists and Otago residents are keen to jump on board.

The assets of Dunedin Railways Ltd have been in hibernation since July, but some will return to the tracks on December 20 for a three-month trial to see who might occupy seats traditionally filled by overseas tourists.

Dunedin Mayor Aaron Hawkins announced yesterday the Dunedin City Council had agreed to underwrite a limited season of rail services that would allow The Seasider (Dunedin to Waitati and back) and The Inlander (Dunedin to Hindon and back) to run on Sundays.

The Seasider will offer views along the Pacific coast, including the Otago Peninsula and Otago Harbour.

The Inlander trip will feature gorges, bridges and tunnels and follow part of the route constructed during Otago’s gold rush. 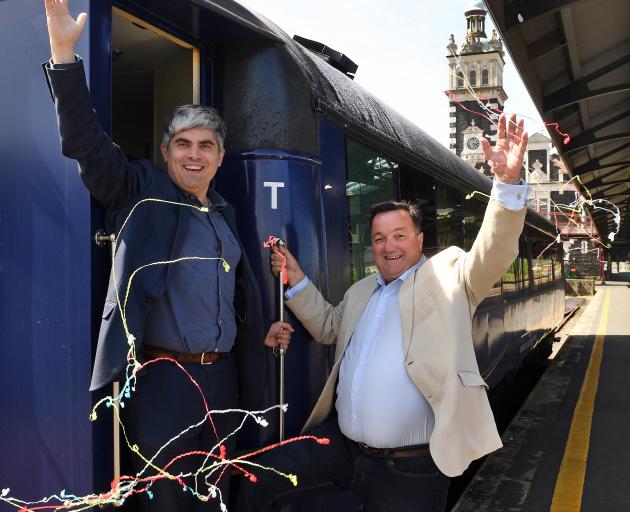 More services may be added if there is demand.

The council will also meet ongoing costs connected to the company’s continuing hibernation.

Dunedin City Holdings chairman Keith Cooper said Dunedin Railways had not focused or invested in the domestic tourism market, because of the influx of international travellers.

"That was great at the time, but putting all our bets on one horse has come back to haunt us all."

Mr Cooper said stunning scenery was a feature of the routes, but promoters planned to take a "scenery plus" approach to present packages that could appeal to Otago residents and visitors.

That was likely to include themed trips.

"We’re running shorter versions of the trips, we’re going to be pretty nimble, be adaptive to demand, be more focused on delivering a different experience that attracts different audiences, and we’re ready to test what demand for this is like."

Mr Hawkins hoped the New Zealand public would jump at the chance to ride the rails again.

"This is the opportunity that our local community and our visitors have, to see whether it’s a viable proposition, in a tourism market that doesn’t have international visitors contributing to it."

Dunedin Venues Management will run the project and its "A Summer of Trains Not Planes" promotion will start with a Santa Express train on December 20.

The summer trial comes amid lingering long-term uncertainty about how the railway company’s assets should be used.

The council-owned train company had forecast ongoing losses of about $500,000 a year and challenges were then compounded by the coronavirus pandemic.

Dunedin Railways closed its doors on March 23, then went into hibernation.

About 50 people lost their jobs and six remained to maintain the company’s assets.

Mr Cooper said a handful of additional people would need to be employed during the trial.

The council is awaiting a report setting out options for the longer-term future of Dunedin Railways.

Results of the trial are expected to inform that.

He hoped establishing a regular service would lead to skilled staff being re-hired.

The limited service is not a relaunch of the company.

However, Mr Cooper said the company had a limited amount of rolling stock that was ready to go at short notice. This did not include heritage carriages.

Mr Cooper said people had been calling out for Dunedin Railways assets to be used and the trial provided a chance to see what could be sustainable.

"It’s a bit of a test case to see what sort of products will attract domestic tourism to Dunedin Railways."

During the 'good' times with heaps of tourists from cruise ships & domestic, it did not work, so why would it work now? Trying the same thing over & over again and expecting another result? The definition of insanity. Unfortunately with our rates/money spent by clueless technocrats.