Eight people taking part in an anti-coal protest have been arrested after securing themselves to a train and lines at Dunedin's Railway Station.

Members of the group Extinction Rebellion began the protest about 7.20am today, stopping a Canterbury-bound train across St Andrew St and forcing the cancellation of an excursion train to Oamaru, as part of an ongoing campaign to speed the phase-out use of the fossil fuel.

About 20 people had been on tracks outside the Railway Station and north of the St Andrews St level crossing, both in front of and behind the train, which had several carriages carrying coal.

Other members of the group climbed on top of carriages. About 30 more people supported the protest from the platform.

Extinction Rebellion says KiwiRail carries 500 tonnes of low grade thermal coal daily from Bathurst Resources’ mine in Nightcaps in  Southland to Fonterra’s Clandeboye factory near Temuka in Canterbury to turn milk into powder for export. 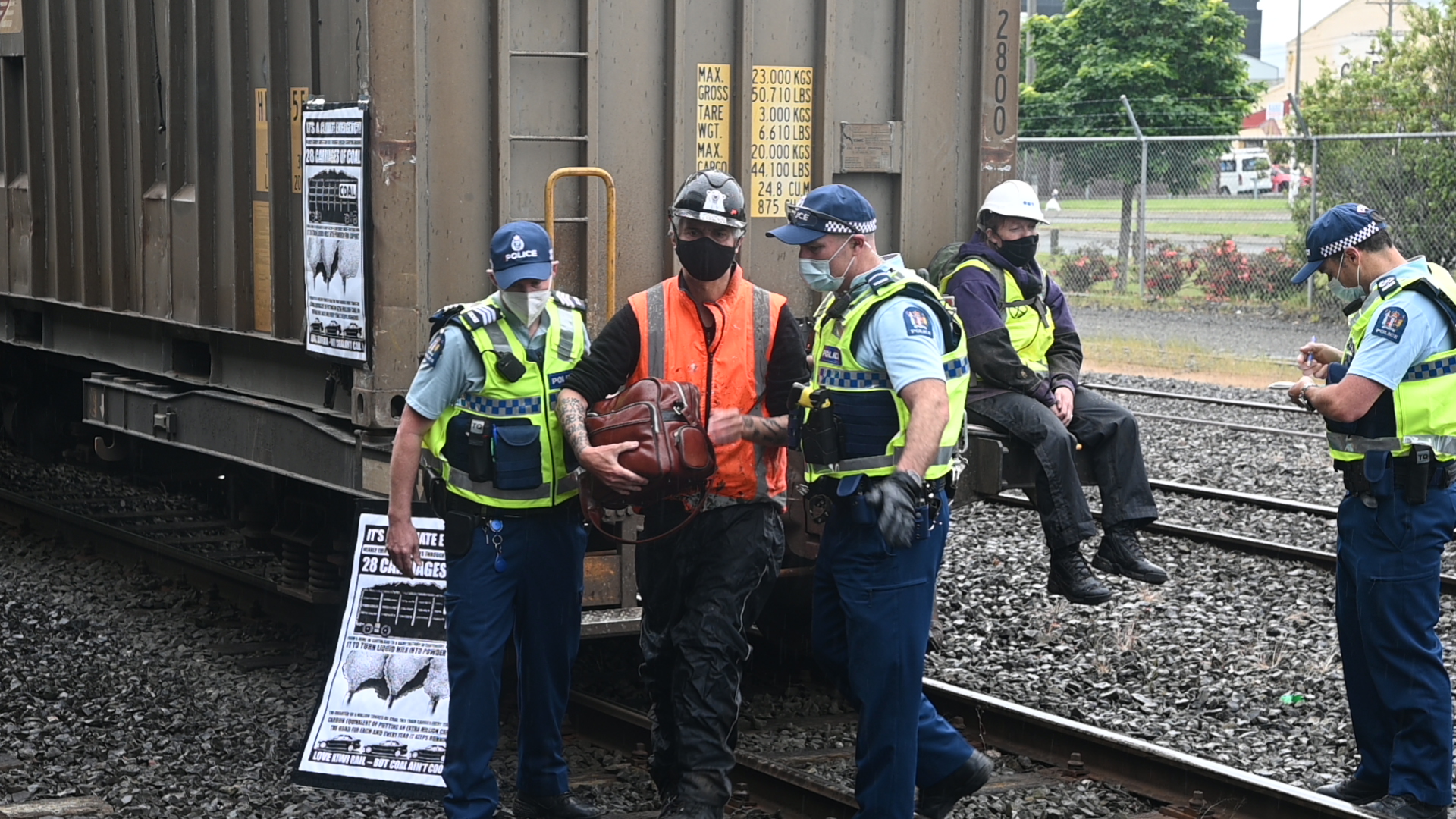 Extinction Rebellion protester Bruce Mahalski is arrested at the Dunedin Railway Station on Saturday morning. PHOTO: CRAIG BAXTER
Police said they attempted to negotiate with the protesters, however they refused to leave the area, and arrests were made.

"While police respect people's right to protest, safety is paramount and this is a working railyard,"  Otago Coast Area Commander Inspector James Ure said this afternoon.

Charges were being considered, he said.

One protester on top of a carriage was cheered as officers in a cherry picker sought to remove him and another protester late this morning. Fire and Emergency NZ crew were also at the scene.

The tracks were cleared by 1pm and the train bound for Canterbury continued its journey.

A KiwiRail spokeswoman said all inbound and outbound train services from Dunedin were halted by this morning's protest.

“We are always concerned for the safety of anyone who trespasses onto railway tracks or into our terminals,’’ she said.

“In the past year we’ve had numerous meetings, signed petitions, written letters and listened to one excuse after another from Fonterra, politicians and industry executives to not only keep burning coal but to expand production further.

“Meanwhile, this past year has seen more record-breaking weather extremes. Another intense marine heatwave is likely to devastate our marine ecosystem this summer. The climate emergency is now. Burning coal in 2021 is a climate crime and Fonterra is New Zealand’s number one climate criminal.

“At (environmental conference) Cop26 the United Nations secretary-general said our addiction to fossil fuels is pushing humanity to the brink,” said Extinction Rebellion member James Cockle from the top of one the coal carriages.

“Yet our Climate Change Minister continues to pander to industry who are only interested in preserving profit margins."
The Government had adopted Fonterra's target of continuing to burn coal until 2037.

“It’s going to be up to ordinary people to stop them."

Protesters want the use of coal phased out, saying it is harming the environment. PHOTO: STEPHEN JAQUIERY

The morning 'Victorian' excursion train from Dunedin to Oamaru, operated by Dunedin Railways, was  cancelled.

A passenger said the disruption was ‘‘bloody annoying’’, as he had been looking forward to riding the train for months.

Passengers were offered a refund or could rebook, he said.

Some of the people he spoke to on board had travelled from the North Island to ride the train and he was unhappy that their trips had been ruined.

Protester Bruce Mahalski said they did not want to halt the excursion train, but during past protests trains had been allowed to use the tracks either side of the train they were occupying.

A brass band had been organised to play already, so the ringing of track signals alerting the public to the incident could not be heard.