Taieri Gorge workers marched through Dunedin streets to deliver the mayor a letter this morning.

Rail and Maritime Transport Union members and local politicians chanted as they made their way from the train station to the Municipal Chambers stairs, saying when the railway was "under attack" they would "stand up and fight back".

People held signs, one saying "a future for Dunedin is a future with rail" and others passing by beeped their horns in support. 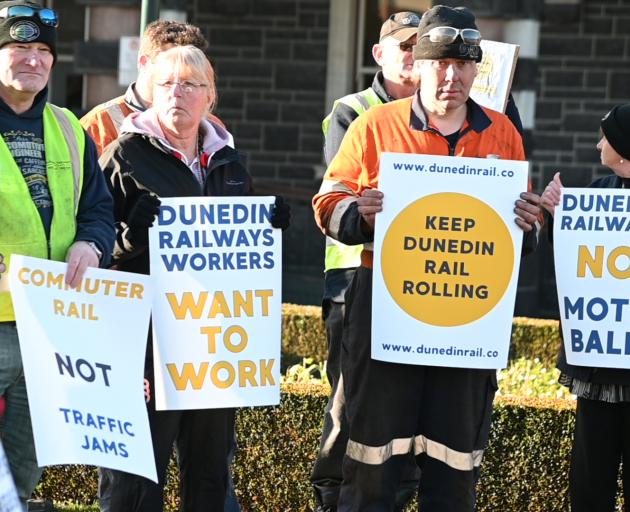 Protesters outside the Dunedin Railway Station. Photo: Craig Baxter
The protest was led by the union's Otago branch secretary Dave Kearns, on behalf of the Keep Dunedin Rail Rolling Campaign, who said there was an "imminent" threat to the railway and their jobs, and that they needed to keep the pressure on.

Dunedin Railways Limited announced it would mothball its track and equipment in a bid to avoid closing entirely, following the impacts of Covid-19, but it would see about 51 people lose their jobs by the end of the month.

The letter delivered to the Dunedin City Council from the campaign expressed the workers "disappointment" that the board were going ahead with an "ill-thought out so-called mothballing scheme".

"We call upon council to use its good offices to the limit of its power to enforce accountability on the board and management of Dunedin Rail Ltd (DRL) to the ultimate owners, the voters and ratepayers of Dunedin and to use every endeavour to ensure that at the very least DRL applies for the extension of the Government wage subsidy and rescinds the redundancy notices to its staff," the letter said.

Taieri Gorge Ltd senior hostess Pat Tutty worked for the railway for about 30 years and said the gorge was the "bread and butter" of the railway.

But it was also a personal loss for her.

She believed the decision to mothball the rail, following Covid-19, was a "convenient excuse".

While I sympathise with rail workers, how can the mothballing be a convenient excuse when pretty much all of the company's revenue has disappeared along with tourists? Is it being suggested here that the company was going out of business anyway, regardless of the pandemic? What is the company supposed to do with no customers? And what do the protesters expect the council to do? Just because it's a partly DCC owned company doesn't mean the council has some sort of magic wand.

They do have a "magic wand" for 10k street signs and other frivolities though.

I fully understand them fighting for their jobs but sorry, I do not supported them. I believe it is wrong to keep asking the ratepayers and tax payers to indefinitely keep subsidising the company. Many of who can not afford or have no wish to go on expensive train rides. I suggest the workers join together and trying to buy the company for $1 like the new owner of Stuff Media has done.

Sorry guys. You're asking for a privilege we can't afford right now.
Government has come up with temporary work schemes focused on the many things that need to be done throughout the country. I'm sure there will be some around Dunedin that will help you out until things get rolling again.

Dunedin was a Railways town. Skills dispensed with and know how lost.

Totally agree, Commuter Train to Middlemarch saves traffic, and it could be extended to Brighton and St Clair and even up to Halfway Bush. I'm a total fan of that, get people on Trains or Cycling to work. The money saved could eventually go to putting a Rail line in Broad Bay. Think Big People

Disagree that Middlemarch commuters would use it, and if they did their numbers wouldn't be that great. People like the convenience factor of their cars too much.

As for the notion of commuter trains to St Clair and Halfway Bush.......