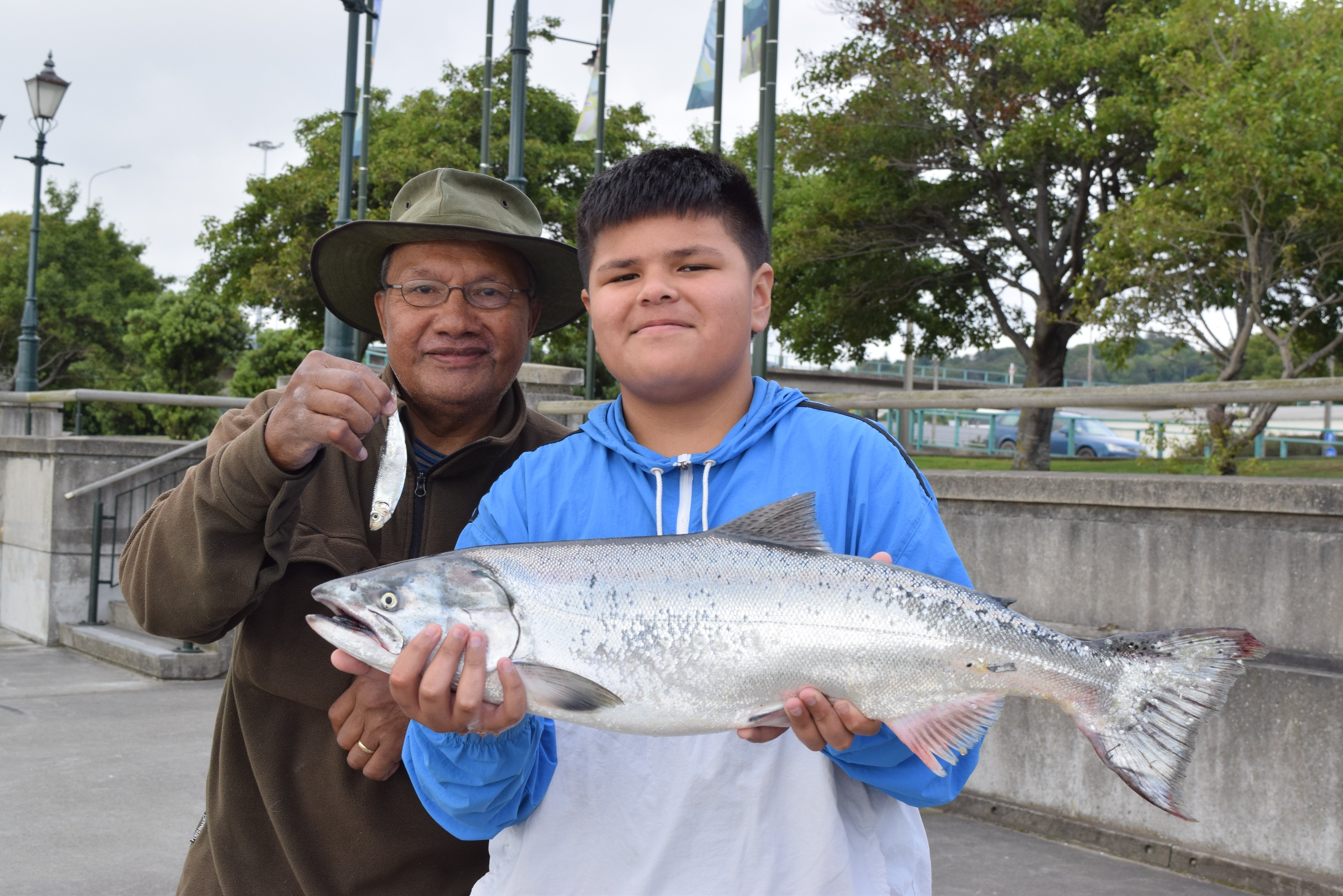 Montell Paulo (12) displays a salmon he caught at Steamer Basin while fishing with his grandfather Samasoni Paulo, who displays a sprat similar to the one used to catch the prize fish. PHOTO: SHAWN MCAVINUE
Dunedin is living up to its name of "Salmon City", making fishers hopeful this season will buck a trend of declining numbers of the prized species.

Dunedin fishers Samasoni Paulo and his grandson, Montell Paulo, had their lines in at Steamer Basin about 5am on Friday last week, hoping to catch their first salmon of the season.

After more than three hours passed, the pair discussed pulling in their lines and going home empty handed.

Montell mentally prepared to reel in a barracouta, but the strength of the fish allowed him to upgrade his expectations to landing a salmon.

After a five-minute fight, that is just what he did.

"It was exciting," Montell said.

The catch took his total salmon tally to five, but this was his first this season.

The plan was to clean the salmon, wrap it in tinfoil and cook it on a barbecue to serve to his family.

Otago Salmon Anglers Association president Colin Williams, of Mosgiel, said Dunedin was known as "Salmon City" because it had one of only two harbours in the world where fishers could catch a salmon without a licence.

The other harbour was in Vancouver, Canada.

Dunedin was the only harbour in the world where salmon migrated back in reasonable numbers, he said.

The best time to target salmon in Otago Harbour was between November and March.

He had heard of fishers catching salmon at various spots across the harbour as early as October this season, he said.

Any fisher who caught a salmon should consider themselves lucky, Mr Williams said.

The association has run an annual salmon fishing competition in Dunedin for 36 years.

About 220 fishers entered the two-day competition last year and three salmon were caught.

The salmon population was declining, he said.

The salmon population was declining across the world, including in Alaska and Canada.

In a bid to reverse the trend, the association had released 18,000 smolt at four spots in the harbour.

The hope was the smolt would mature at sea and return to the harbour a few years later after growing to the legal size of 45cm or longer.

The fishing competition would run on March 6 and 7 this year.

Otago Fish & Game Council chief executive Ian Hadland said the salmon population in the South Island had been declining for nearly a decade.

"Seeing a few more salmon around this year would be positive news."

Montell landing the "rare and sought-after species" was positive news, but more salmon sightings were needed before celebrating a reversal of the salmon population trend.

Salmon in the harbour fell outside the jurisdiction of the council because they were considered a sea fish when in the sea.

If a salmon was in freshwater, such as the Water of Leith, it was considered a sports fish.

"As soon as they get into freshwater they get our protection and you need a licence to catch them."

People do know why salmon numbers are declining, it's no great mystery!
“Environmental variables like warming temperatures and habitat loss are detrimental to salmon abundance and survival. Other human influenced effects on salmon like overfishing and gillnets, sea lice from farm raised salmon, and competition from hatchery released salmon have negative effects as well”.