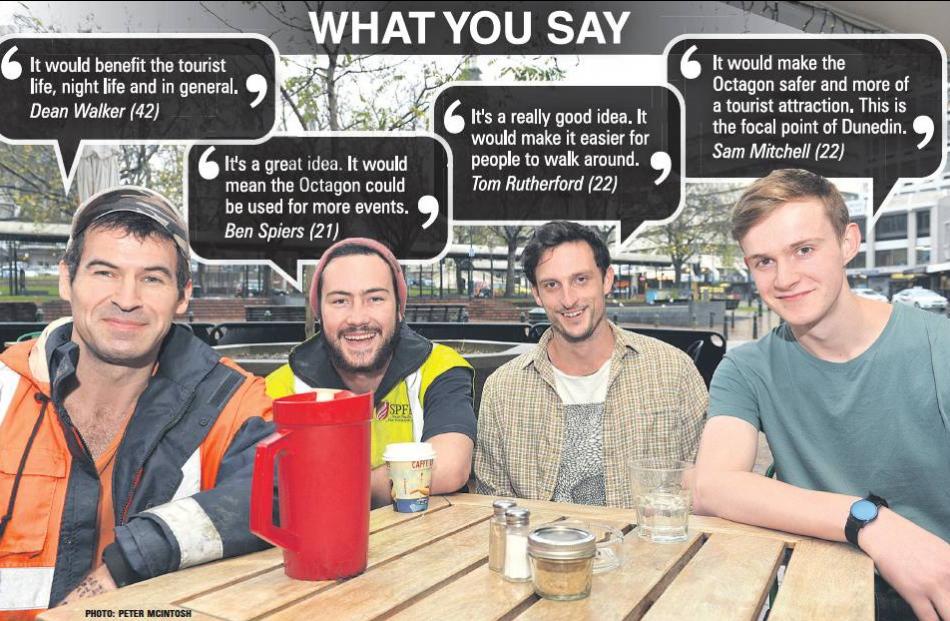 Full support and total opposition are among the range of business responses to a proposal to turn the lower Octagon and part of lower Stuart St in Dunedin into a pedestrian-only zone.

The proposal has also prompted concerns from taxi drivers.

Their pitch envisaged the area becoming the ''heart'' of Dunedin's CBD and acting as a ''visual showpiece'' for the city.

It impressed councillors, who voted during deliberations to ask council staff to report back on options to trial the idea.

But any consultation undertaken is unlikely to find consensus among those affected.

The area is home to bars and restaurants, businesses from travel agents to florists, 15 pay and display car parks, and areas of five-minute vehicle parking.

The zone would allow people to walk in the area without worrying about traffic, something that could benefit businesses, she said.

Miss Reid Florist owner Patsy Murphy was on the opposite side of the argument.

Five-minute parking areas were used by many who visited her business, and older people who needed access to the nearby Regent Theatre.

She was also concerned about access for regular courier deliveries.

Those concerns were echoed by Claire Grenfell, who owns the Thistle Cafe and Bar and the Craic Irish Bar in the Octagon.

Mrs Grenfell said her preference would be for a ''shared space'', which was common in Europe, where vehicles were slowed down and pedestrians could more safely use the street.

The area would be ''a sad and lonely space'' during the week in winter if vehicles were banned, she said.

She was also worried about the up to 20 deliveries a week to the Craic - at all times a of day - and how they would get access.

Five-minute parks in the Octagon were useful for the cafe, and even more so for Miss Reid Florist, she said.

Velvet Burger owner James Arnott said the proposal would need to be considered alongside the council's ''restrictive'' outdoor furniture policy.

The proposal ''could be amazing'', although he, too, had concerns about the loss of parking.

Other businesses spoken to were ambivalent about the change.

At the lower Octagon taxi stand, a taxi driver who would only give his first name, Gary, said any such closure was ''a hassle'' for drivers as the stand was a good for picking up fares.

''Everyone complains about it when they do close it,'' he said.