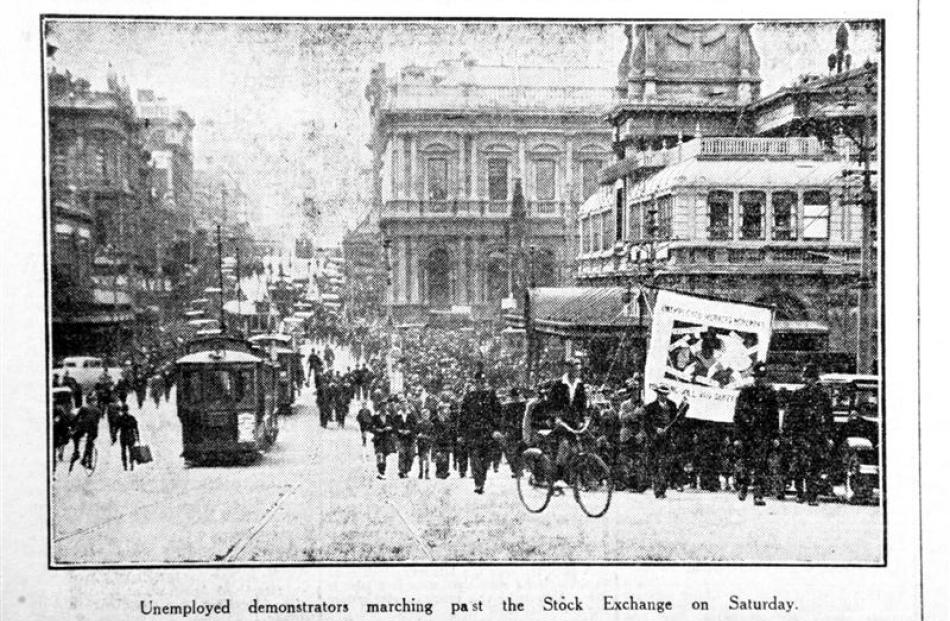 Unemployed march through the Exchange in March 1932. 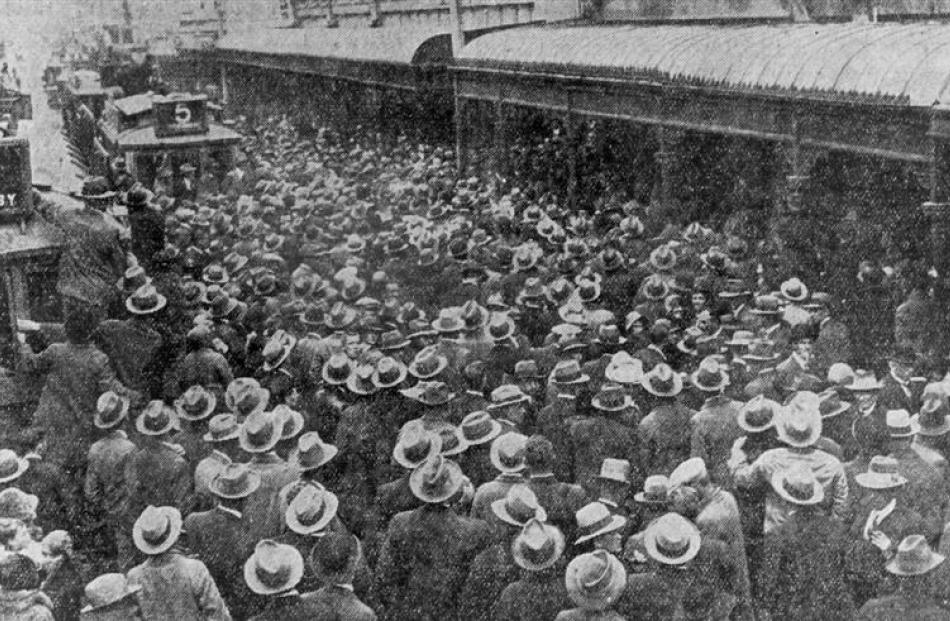 The "storming" of Wardells during the first Dunedin Great Depression "riot". 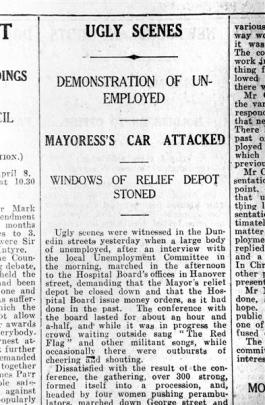 It is 70 years since the Great Depression was finally laid to rest but still it casts a shadow across the psyche of the world's economists, politicians and commentators. Last month, New Zealand Herald political columnist Fran O'Sullivan wrote that the current crisis was "remarkably like the conditions which gave rise to mass human misery during the 1930s" and Nobel-prize winning economist Joseph Stiglitz said that the current crisis "in many ways represents a worse situation".
It is too late now to find anyone with direct experience of the Great Depresssion, but Dunedin historian Emeritus Professor Erik Olssen spent many hours in the 1970s listening to those who had stories to tell of their years of hardship. Reporter Mark Price spoke to him recently about soup kitchens, work camps, riots and hard times in Otago.

On October 28, the Otago Daily Times reported "financial fever, panic and excitement" at the New York Stock Exchange with "frenzied selling", "frantic dumping" and an "avalanche of losses".

Four days later, it reported a "powerful" recovery and "excited buying of bargains". Next day came a "tremendous collapse".

It could be 2008 but what the newspaper was reporting was "Black Thursday", "Black Monday" and "Black Tuesday" that made up the most spectacular days of the 1929 Wall Street Crash.

What impact this news had on Otago people 79 years ago is hard to imagine but Professor Emeritus Erik Olssen accepts it was probably not too much different from the way news of the latest crisis has been received here.

"There's a sense of unreality. It's sort of like the phoney war in 1939-40 where we know we are at war with this massive monster but nothing's happening."

But he considers the actions of central Government made things worse and in later years the Depression would become "symbolic of ineptitude in high places and indifference to human suffering".

The most obvious sign of the country's economic decline - the "big, dramatic, visible measure" - was unemployment.

"We would say the Government in fact created a very high proportion of the unemployment because it retrenched. According to all the best economic advice, that's what governments were meant to do - cut their cloth according to their income. So they weren't meant to be borrowing."

New Zealand had about 100,000 unemployed men (women were not included) in a population of 1.5 million and at the start of the 1930s there was no social security.

In his History of Otago, Prof Olssen wrote that the unemployed "came to see themselves as something of a political football, modern equivalents to lepers, an embarrassment bemoaned by all and helped, when helped at all, reluctantly".

At first, the Government took virtually no responsibility and local communities were left to provide soup kitchens and depots for food, clothing and coal.

And although the Unemployment Act was passed in 1930, most of the responsibility still rested on the Dunedin City Council and the Otago Hospital Board.

Prof Olssen said provision for the unemployed was "niggardly" and became more so as the country's economy worsened.

The unemployed were set to work forming croquet lawns at Opoho and Montecillo, they created a tennis court at Tainui, a bowling green at Logan Park, they extended the Rhododendron Dell and the Azalea gardens, they levelled Chisholm Park and they widened the road to Aramoana.

Such relief schemes provided single men with two days' work and a few shillings a week. Married men got a little more.

"By our standards, no-one at that time lived particularly well . . . and nobody can take a 20% cut in their standard of living without feeling they've got a big challenge on their hands."

As well, workers on relief schemes were regularly forced to take unpaid "holidays", with most off work one week in every four.

"The hospital board, which at that point in Dunedin was charged with responsibility for running the scheme, basically went on holiday for two weeks."

Hundreds of unemployed assembled outside its offices in Hanover St, but their demands for food and supplies were denied. They then marched to George St grocery store Wardells and 150 tried to enter.

Police withstood the rush but a large window was broken and a policeman was injured. The shop's proprietor said he was not willing to submit to intimidation and there was a second attempt to storm the shop.

The protest kept George St closed all day and eventually, that evening, 800 parcels of groceries were distributed from a depot in Dowling St.

Three months later, in April, 1932, a crowd singing the "Red Flag", again marched on the offices of the hospital board demanding the mayor's relief depot be closed and they be given money orders rather than "chits" for supplies.

The ODT reported that, dissatisfied with the result, "the gathering, over 300 strong, formed itself into a procession and, headed by four women pushing perambulators, marched" to the mayor's depot in St Andrews St where there was a "hostile demonstration".

At the corner of George and St Andrew Sts, the mayoress's taxi was held up by a group of unemployed.

"The door was opened and an effort was made to pull Mrs Black out, and the car was tilted over on two wheels."

The taxi managed to escape when a tram divided the crowd.

On another occasion, a crowd tried to storm the offices of the Otago Harbour Board but were repelled by police with batons. Six protest leaders were arrested and the police finally gained the upper hand.

There were similar riots in Auckland and Wellington.

"Many on the Left felt that the only way to stop governments from retrenching still further and further with all the human cost was to get their people out on to the streets and make it clear that it was going to be a pretty high cost in terms of civil disorder . . . and I think it did work to some extent."

Prof Olssen said one of the aims of the relief schemes had been to get the unemployed single men out of town and for many, being sent to Central Otago to pan for gold or trap and poison rabbits was quite acceptable.

"I interviewed a number and they just had a great old time.

Instead of going to work at 13, off they went with 10 of their mates and they were camping out near Oturehua, fossicking for gold, selling it on the black market, drinking the proceeds.

"A lot of them felt it was the time of their lives. They didn't realise til later what they'd foregone."

As the Depression wore on, more and more "white-collar" workers and even professionals joined the ranks of the unemployed.

"For bank clerks or school teachers to end up on the Lindis Pass sleeping in a tent on bare, frozen soil wrapped in a rug; they found that a privation."

Such hardships in "slave camps" increasingly outraged the general community and attempts to send unemployed married men there failed, their wives resisting and the churches seeing the move as an attack on marriage.

Prof Olssen said that from 1933 - as export prices improved and government policies began to work - the country began to experience "spectacular" economic growth.

The Depression was over but the lessons, Prof Olssen believes, linger among older politicians at least.

"The Depression becomes an indictment of human stupidity really. It comes to symbolise that a generation later and that still is its broad meaning among older cohorts.

"To the young it's ancient history, like the First World War or as far away as the crusades . . . but they will take on this sense that what happened in the '30s shouldn't have happened, needn't have happened and they are smarter and wiser . . ."