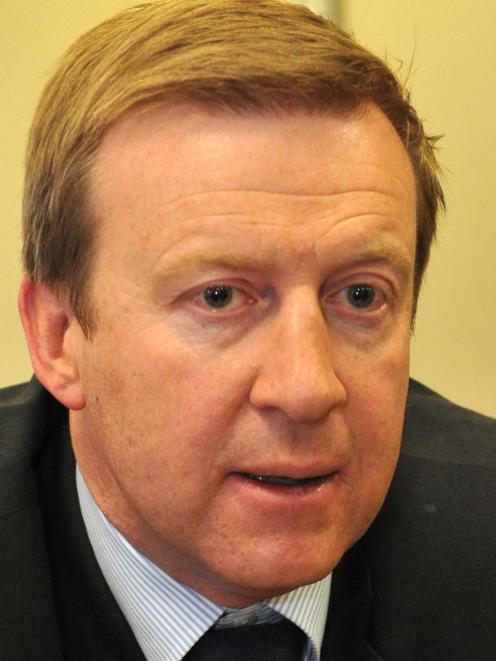 Jonathan Coleman
A report suggesting another delay for the rebuild of the clinical services building at Dunedin Hospital is just a ''pessimistic guess'', Southern District Health Board finance head Peter Beirne says.

And Labour Dunedin North MP David Clark has blasted the Government for the potential delay, calling it an ''absolute outrage''. The paper to a board committee yesterday said detailed planning work for the $200 million clinical services building would be completed by December 2016.

That work would then be used to ''inform'' the development of the business case, the key step in obtaining Government approval for a major project. Earlier this year, Health Minister Jonathan Coleman told the Otago Daily Times he hoped the Cabinet would consider a business case for the project as early as December, but most likely next year.

That was later than what Dr Coleman's predecessor, Tony Ryall, said last year when he stated the business case would be considered in 2015.

Yesterday, Dr Coleman said in an email he hoped the ''first stage of the plan'' would go before the Cabinet later this year. A spokeswoman declined a request for clarification.

''I expect the first stage of the plan could go to Cabinet as early as late 2015, but there are a number of issues to work through first,'' Dr Coleman said .

Dr Coleman's spokesman said the minister had nothing to add when the ODT asked when he expected the full business case.

''There's no way ministers who are competent in their portfolios could have not known that decision-making would be over such an extended time frame.

''Clearly, it suited the last administration to have the public believe that the matter was being attended to leading into the election.

''Now we find that it's on the never-never, without even a projected date for completion of the business case,'' Dr Clark said.

A few weeks ago, the Labour MP organised an online petition urging Dr Coleman to take action on the rebuild. By yesterday, it had more than 2600 signatures. At the meeting yesterday, board member Dr John Chambers said the southern community would be ''perplexed'' by the December 2016 deadline for the planning work.

Asked to clarify after the meeting, Mr Beirne said the December 2016 deadline was a ''pessimistic guess'' and he hoped to meet expectations of earlier progress.

Mr Beirne said the situation would be clearer once a rebuild partnership group being established with the Ministry of Health and the Treasury was confirmed. The clinical services building at Dunedin Hospital is deemed to have reached the end of its economic life, and will be replaced, rather than refurbished.

No replacement or departure date has been announced yet for health board chairman Joe Butterfield, two months after his retirement was confirmed. Asked for an update, Dr Coleman said the appointment process was ''in progress''.