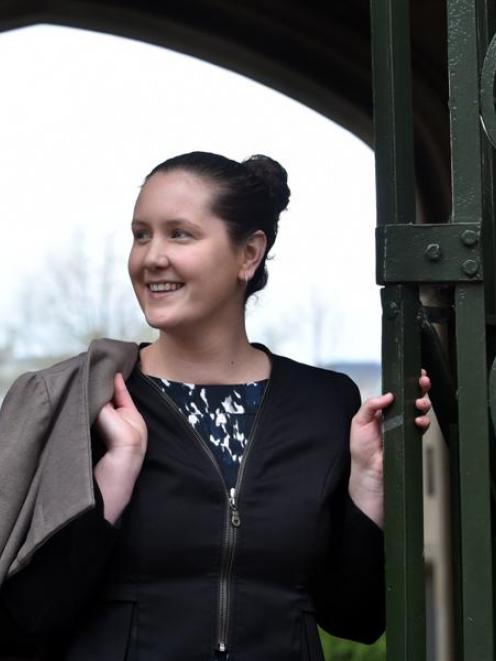 New Zealand Innocence Project research co-ordinator Bridget Irvine on the University of Otago's Dunedin campus. Photo by Peter McIntosh.
The University of Otago is host to New Zealand's Innocence Project, which works to exonerate people who have been wrongfully convicted of crimes, Carla Green reports, on the heels of the second annual International Wrongful Conviction Day yesterday.

Imagine, if you will, that you have witnessed a crime.

You see a light grey car flee the scene.

But then, you hear the media report the crime.

The car, they say, was white.

What colour was the car? Are you sure?

''When someone witnesses a crime, you have no control over the factors that may distort and influence their memory,'' Bridget Irvine says.

And that, she says, is a dangerous thing.

Ms Irvine is a law graduate from the University of Otago, and is doing a PhD in forensic psychology.

She is also the research co-ordinator of the New Zealand Innocence Project, a collaboration between the University of Otago and Victoria University.

The project is ''quite tiny'' compared with some of the other Innocence Projects worldwide, Ms Irvine says.

''In the [United States], they have huge projects with multiple volunteers, multiple staff attorneys working on these cases full time.''

But despite its small size, the project does the same work as its supersized cousins in the United States: it works to exonerate and release wrongly convicted prisoners.

Otago dean of law Prof Mark Henaghan is involved in the project, and says it is actively working on two cases.

One is the case of Alan Hall, who was convicted of murder in 1985 and, having served his time in prison and been released, still maintains his innocence.

The other is a high-profile case that the project cannot talk about publicly yet, Prof Henaghan says.

But he would say: ''It will be very exciting if we can get it through''.

Innocence Projects around the world have become famous for a number of high-profile exonerations involving newly discovered DNA evidence.

But, Ms Irvine says, as access to DNA testing becomes more readily available - as it has in New Zealand - and as Innocence Projects continue to chip away at cases where DNA evidence can exonerate innocent prisoners - as they have in the United States - a different, more challenging kind of case is beginning to crop up.

''[Cases where] the eyewitness didn't see something properly, or that there was a false accusation, or that the snitch lied.''

And often, they require advocates to prove the fallibility of human perception and memory, a much more slippery burden of proof than a yes-no DNA test.

''Psychologists [are] involved in the project who can really direct and point to the types of cases where the science has changed and the case still hasn't caught up.''

Those are the kinds of cases that the project tends towards, she says.

But even then, it is often difficult for science to ''translate back into the courtroom''.

On that front, New Zealand faces many of the same issues as countries all over the world, Ms Irvine says.

And in some ways, the New Zealand system is more progressive than others.

''New Zealand's actually made some really fundamental changes in the way we conduct investigations,'' she says.

But in other ways, Ms Irvine says, the New Zealand justice system leaves much to be desired.

The royal prerogative of mercy - a pathway designed to reopen criminal cases where a person may have been wrongly convicted - is flawed, she says.

''The prerogative of mercy pathway is not transparent. It is politicised. It puts the burden on the individual to identify, locate, test new evidence, in order to get the avenues reopened, to get back into the courtroom.''

And for the most part, Ms Irvine says, New Zealand has ''slammed the door shut'' on reform.

''Consistently, you hear officials say, `Our system is fine, and our current structure works perfectly'.

''[New Zealanders ] are saying it's fine, and the reality is, nobody knows whether it's fine or not, because these cases, by their very nature, aren't known, and remain hidden.

''So that, to me, is one of the concerning factors about New Zealand, that these other countries acknowledge that things are going wrong ... and we seem less willing to do so.''

It remains unprepared to deal with a witness who saw a grey car leave the scene and, by the power of media suggestion, creates a false memory of seeing a white car leaving the scene - a common psychological phenomenon.

And it remains unprepared to help exonerate the driver of a white car who has languished in prison for years because of a mistake.

Ms Irvine and her colleagues have their work cut out for them.