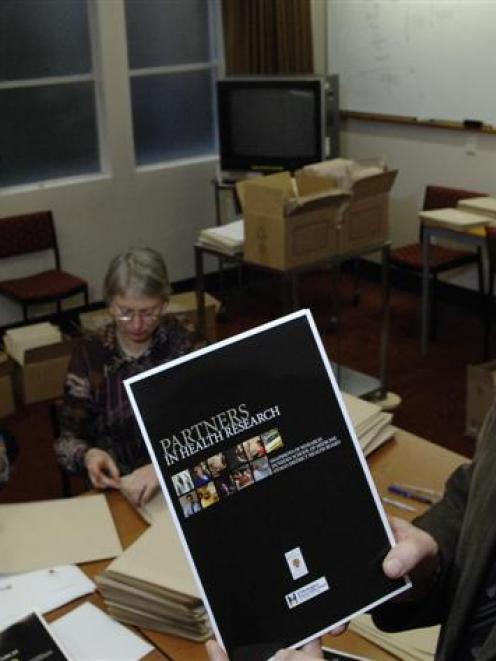 Prof Andre van Rij shows one of the 3000 booklets "Partners in Health Research" being distributed throughout the Otago community, while office staff Ali Cameron (left) and Ruth Sharpe prepare brochures for posting. Photo by Linda Robertson.
People tired of flicking through old magazines about Hollywood gossip will have something new to read at doctors' surgeries this week - a 26-page colour booklet telling some of the stories about health research being carried out in Dunedin.

Raising awareness of the need for money for health research resulting from the partnership of the Otago District Health Board and the University of Otago's Dunedin School of Medicine is just one of the reasons behind the production of the booklet.

Research advisory group chairman for the two organisations Prof Andre van Rij said the 3000 booklets were a "good news message" to the community.

It was the first time the two organisations had communicated in this way and he said the cost of at least $15,000 was not large compared with the more than $11 million spent by the two bodies on research.

Dunedin was unique in the way its people were willing to participate in research, he said.

Some 400 people were taking part in the Vascular Research Group study he is co-leading, looking at the genetic factors in vascular disease.

Information about research into diabetes, skin cancer, sleep, cancer drugs and young drivers are among the "snapshots of research" in the booklets, which are being sent to doctors' surgeries, lawyers' offices, community leaders, health funding bodies, staff in both organisations and the Ministry of Health.

They will be accompanied by pamphlets outlining the need for continuing funding and giving people the opportunity to make a donation to the Dunedin School of Medicine, Healthcare Otago Charitable Trust or the Otago Medical Research Foundation.