Residents argue for rocks to stay 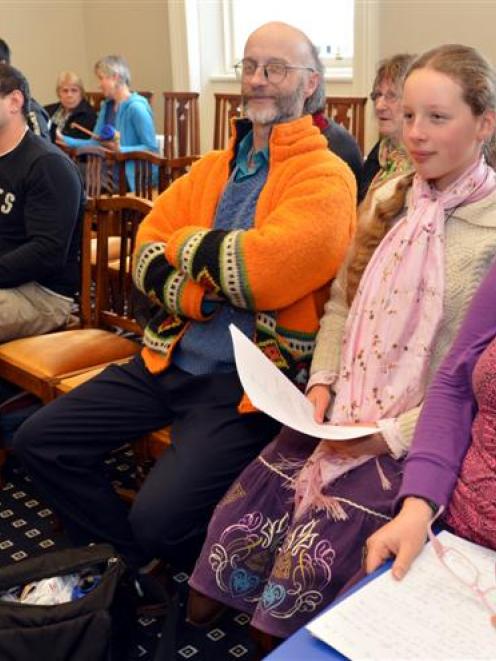 Warrington residents (front row, from right) Janine Cunningham, her daughter, Grace-Valentina Cunningham, Joseph Dougherty, Chris Felipe-Alves, Robert De Senna, Lynette Hastie and Raewyn Williams wait to make their case to the Dunedin City Council to reverse a decision removing rocks blocking vehicle access to a local track. Photo by Peter McIntosh.
The removal of a pair of boulders blocking vehicle access to a track to Blueskin Bay has been stalled, for now.

The decision was made by the Dunedin City Council yesterday and comes after its infrastructure and services committee earlier this month decided to remove the rocks for a six-month trial, following a plea from the Warrington Ratepayers and Householders' Association's representative, Sir Julian Smith.

The rocks were placed there six years ago, following community concern about the safety of the short track, which had been used for years by some as an access to take small boats to the water.

The committee acknowledged the proper legal process to close the road had not been followed in 2008 and voted to reopen it, despite staff advice to keep the steep, narrow, blind track shut for safety reasons.

Eleven Warrington residents appeared at yesterday's public forum to argue the rocks should stay in place.

Mainly residents, they expressed their ''horror'', ''bewilderment'' and ''distress'' at learning of the decision to remove the rocks, despite a recent petition that gathered 116 signatures to keep them, a survey showing 75% of respondents wanted them to stay and the local community board's recommendation to leave them in place.

The rocks were there because Warrington as a community wanted them to be there, Janine Cunningham, who lives nearest the track, said.

''Why has the infrastructure and services committee ignored our community board?''General concerns included that the track's exit on to a busy corner and verge area frequented by local children was almost blind.

Lynette Hastie, who lives on the corner near the track, said she had often gone out to tell children - who would be at ''even bigger risk'' if the rocks were removed - to take care at the corner.

People were also concerned about boy racers using the track and damage to the flora and fauna of the estuary from vehicles driving on it.

Rhys Owen, a civil engineer, said it was ''unethical'' for the committee to dismiss council staff's concerns about the track, and asked who would be liable if it was reopened and there was a crash.

Many also criticised the Ratepayers and Householders' Association, which they said had only a few members, had never contacted any of them about any matter, despite them also being ratepayers, and whose representative, Sir Julian, did not live permanently at Warrington.

Sir Julian said he had no comment other than to say, as far as he was concerned, the matter was a legal issue and if the council did not remove the rocks it was in breach of the law.

Procedurally, the council was unable to overturn the committee's earlier decision, but council chief executive Dr Sue Bidrose said operationally, staff could ''not be in too much of a hurry'' to remove the rocks before the committee met again.

Given that could be done, the majority of councillors then voted to return the matter to the infrastructure committee for reconsideration.

The next infrastructure services committee meeting is on October 14.

Opponents and proponents of the rocks' removal will be able to make their case to councillors at another public forum before the infrastructure meeting.