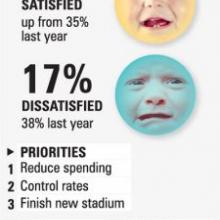 Dunedin Mayor Dave Cull was wearing a satisfied smile yesterday, following the release of a residents' opinion survey that showed a sharp increase in public satisfaction with his council.

Acting chief executive Athol Stephens was also basking in the glow of a result that showed 63% of residents were satisfied with his staff, up 11% from last year.

The survey, run annually since 1994, has this year had a remarkable turnaround.

Satisfaction with the overall performance of the council increased significantly, with 46% of respondents satisfied with their council, and 17% dissatisfied, compared with 35% and 38% last year.

Mr Cull said he was pleased the increase in satisfaction was not just confined to a few areas. The result showed the council's elected representatives had followed through on their election promises, he said, and the results for council services were "a huge credit to staff".

The opinion survey was completed by Christchurch company Research First, and was designed to measure residents' satisfaction with the council's performance, and with the city itself.

The postal survey was sent to 4500 randomly selected people on April 21.

The result was based on 899 responses, just over 20% of the surveys sent.

Carl Davidson, of Research First, said the survey showed it was "a really good year for the city council".

Mr Davidson presented the survey last year, which showed that in 2010 more Dunedin residents were dissatisfied than satisfied with the performance of their council for the first time since surveys began.

The company reported then the figures needed to be interpreted in a context of a more pessimistic city populace overall and a national decline in satisfaction.

There was no such analysis this year, though Mr Davidson said the rise in satisfaction and reduction in dissatisfaction could not all be a result of new leadership at the council.

There were also no major events at the time of the survey that could have skewed people's perceptions, although it was not after the Christchurch earthquake.

"The shift from last year is remarkable," Mr Davidson said.

Results from a 103-page report from the survey showed residents aged 65 years old and over were the most satisfied, while the youngest were the least satisfied.

All ages, though, were significantly more satisfied than the year before.

One area where satisfaction levels were not improving was respondents' perception of Dunedin as a thriving city; only 29% agreed it was, the same as last year, but down from 50% in 2006.

The most important issue for respondents was safety, with 92% reporting that was most important, but only 41% agreeing the city was safe.

Satisfaction was highest for the reliability of rubbish collection, with 88% satisfied, while 81% were satisfied with kerbside recycling.

Satisfaction was relatively high and increased across all measures of drainage, water and sewerage, was highest for hygiene at city food establishments at 71%, but lowest for building consent processing at 25%.

Mr Stephens said it appeared people were happy with core services, which was "very satisfying".