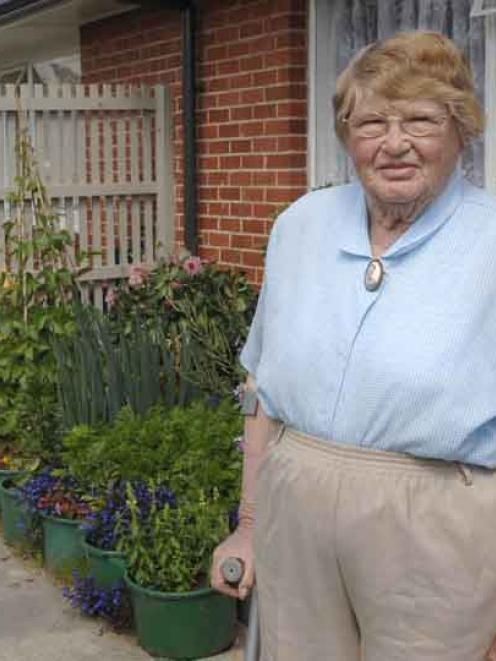 Council flat tenant Flora Keown (82) outside her Taieri Rd unit. Photo by Linda Robertson.
Tenants of council flats that have already been retro-fitted with insulation say the work adds to what are already well maintained units.

The Dunedin City Council has decided to spend $1 million a year on upgrades in the next five years, with $700,000 on re-roofing and insulation, $200,000 on exterior upgrades and $100,000 on internal upgrades like showers and ventilation, as part of its social housing strategy.

Flora Keown, a tenant of council units in Taieri Rd, said insulation had been fitted there three or four years ago.

"I suppose it is warmer," she said.

"They're comfortable. We don't expect a palace," she said of her unit.

She said some units had baths, and tenants were required to pay 50% of the cost if they wanted a shower fitted, something many older people needed.

Community development team leader Rebecca Parata noted the $100,000 for such items, but said the finer details of the upgrades were yet to be decided.

Social housing working party chairwoman Cr Fliss Butcher said yesterday the idea of retro-fitting the units was a message that came "loud and clear" during submissions on the strategy.