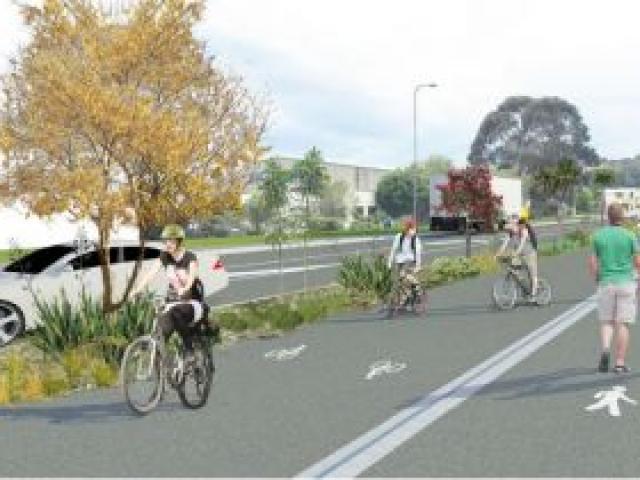 The latest design for a section of Portobello Rd cycleway includes a shared pedestrian/cyclist path separated by a strip of vegetation in one section. Photo supplied.
Costs continue to pile up for a problem-plagued section of a Dunedin cycleway, with a fresh redesign expected to cost more than $500,000.

The latest solution for the section of Portobello Rd between Portsmouth Dr and Timaru St comes after the initial changes in 2014 prompted an outcry from businesses.

In March last year, a new solution was developed which retained the two-lane layout but provided more space for turning vehicles, but the council announced yesterday it had come up with yet another design.

Mayor Dave Cull has defended the council in the wake of the extra costs, saying the community should be confident in its ability to roll out cycleways in the city.

"I think the community can have confidence because we are putting in something that will work,'' Mr Cull said.

The new design, by firm Boffa Miskell, cost about $70,000 and the cost of installation was expected to come to "greater than half a million'' dollars, but would only become clear after tenders came in.

The latest design included the removal of a service lane outside residential properties and the installation of a shared pedestrian/cyclist path, separated from other traffic with a strip of vegetation in one section and a grass berm in another.

Residents would be able to gain access to their properties through the shared pathway, but those parking on the street would now have to park a further 5.5m from their houses on the other side of the pathway.

Work on the new layout was expected to start in the next couple of months.

Asked if council staff should take some of the blame for previous problems with the section of cycleway, council transport group manager Ian McCabe said staff had learnt from previous mistakes.

"Council staff have recognised that there were some mistakes made and we are looking to try to correct those mistakes.''

"My commitment is try to get it right,'' Mr McCabe said.

He was happy with the latest Portobello Rd design, especially the positive response it had received from residents.

Businesses on the section of Portobello Rd spoken to by the Otago Daily Times yesterday had no issues with the changes.

CSL Containers director Philip Chapman said he "had no problem'' with the redesign, as it retained the extra space for turning vehicles added last March.

"I'm perfectly happy with the way they have put that flush median down to give our trucks a turning circle to get into the gates, whereas before they had to turn into oncoming traffic.

"It's just a pity they didn't do it properly the first time,'' Mr Chapman said.

The changes had more of an impact on residents living on the street.

He did not want to say much about the council's ballooning costs.

"They have got egg on their face and there is no point rubbing salt into the wound.

"It's happened and at least they are making amends.''

Mr Cull said the extra cost of the new design should not be the only focus.

"Finally, we are talking about getting value and not just focusing on cost,'' he said.

One of the reasons the initial design did not work was because there was too much focus on "keeping it as cheap as possible''.

As a result of the previous issues, the council had also learnt to more thoroughly involve people affected by change when planning cycleway developments.