PHOTO: ODT FILES
Stocks of prednisolone, a drug used to treat the respiratory illness RSV, are in plentiful supply in Otago and Southland.

The Southern District Health Board’s hospital pharmacy service said it had sufficient supplies and was not anticipating problems.

Board chief medical officer Nigel Millar said the number of cases of respiratory illness in the region, including RSV, had fallen over the weekend, but the usual peak period for winter ailments in the South was not yet here.

"However, it is still too early to predict whether numbers will continue to reduce, as historically in Southern our busiest months for respiratory infections are August and September."

Patient numbers in Southland Hospital’s children’s ward, which had been at full capacity for the past fortnight, had eased, Dr Millar said.

"Those patients who have been confirmed with RSV are mostly children, but a small number of adult patients have also been cared for at Southland Hospital, and this remains the case."

Occupancy in the children’s unit at Dunedin Hospital remained the same as last week.

"Lakes District Hospital reports a small number of patients with respiratory illnesses and continues to liaise closely with the base hospitals in Dunedin and Invercargill."

SDHB medical officer of health Susan Jack urged parents and caregivers who had children at daycare to take action if their children were or had been ill.

Pharmac director of operations Lisa Williams said on average New Zealand used about 8500 bottles of prednisolone a month, but in June orders almost doubled to 15,500.

“Knowing the importance of our children being able to get prednisolone oral liquid to help them fight RSV, we worked with our supplier to ensure the stock we were already expecting into New Zealand could be accessed quickly,” Ms Williams said.

“Stock was released to wholesalers on Thursday last week and was available to pharmacies to order from Friday." 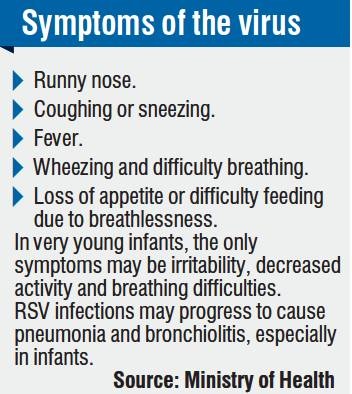