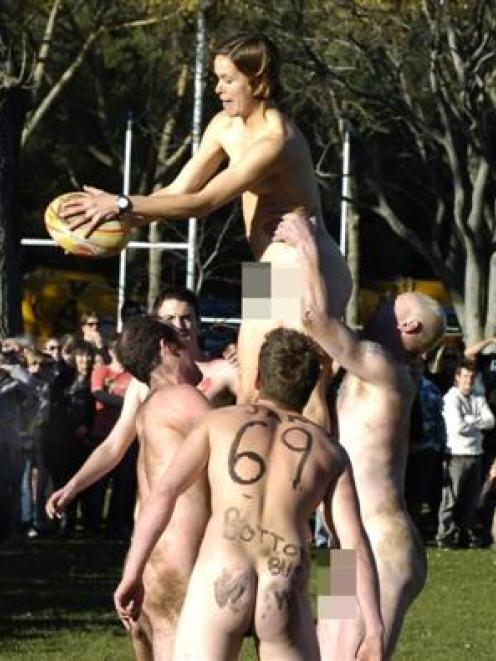 About 1500 people lined the pitch as the two teams, captained by nude rugby stalwart Dave Bourke and newcomer Johnny Morris, battled it out for the Innes-Jones-Davies trophy.

Dunedin students made up the bulk of the Nude Blacks team, which was obvious when one had to leave halfway through the match to sit an exam, while the Welsh players were mostly tourists.

Pre-match warm-ups, including press-ups and knee-ups, delighted the crowd. The haka was also a hit, especially when the Welsh danced and threw leeks in response.

Refereed by former All Blacks John Timu and Richard Lowe, the Nude Blacks opened the scoring in the tightly contested match.

Highlights included players getting up close and personal with spectators in some overly eager sideline tackling, a fight, and the brazen introduction of a female streaker.

She distributed hugs, took part in a lineout and scored a try before exiting the field, only to return, police hat in tow, to arrest a clothed "streaker" later in the match.