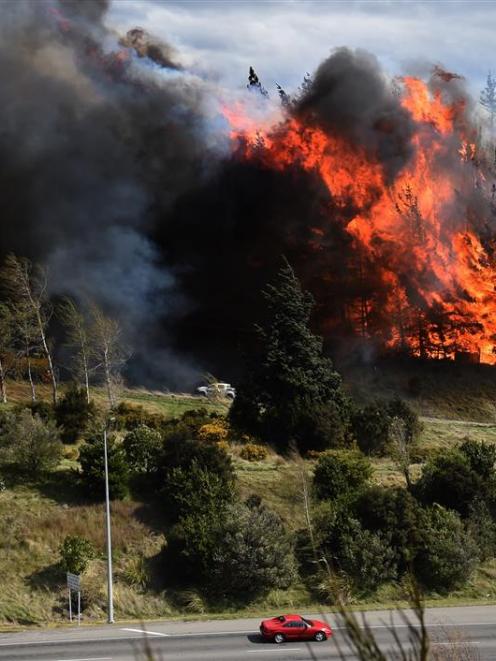 The Saddle Hill fire burning in Dunedin in October last year. Photo by Peter McIntosh.
An operational review of the "erratic'' Saddle Hill fire in Dunedin last year has revealed the first ground crews at the scene had to battle the blaze for more than two hours with "chaotic'' communication, including cluttered radio channels, forcing many key decisions to be made by cellphone.

A key finding of the review - undertaken by the Otago Rural Fire Authority (ORFA) and New Zealand Fire Service - was the communication between fire crews on the ground was compromised during the first hours of the fire.

The crews were called to a fire in Morris Rd at 1.51pm on October 7 last year.

The wind speed at the site ranged between 60kmh and 90kmh and the fire spread rapidly, flames reaching heights of 8m. The fire damaged nine structures including houses, garages and outbuildings.

The review stated: "Radio traffic was chaotic; many key decisions were made by cellphone and the log recorder was not privy to many of those.''

However, interference on the channels stopped the use of the radios. The interference was caused by the location of the firetrucks in the landscape.

Consequently, some key decisions to battle the blaze in the beginning had to be made by cellphone.

"Communications is one area we could improve technically... we used cellphones - that's not best practice but it was a good fallback position and it didn't affect the overall result.''

The arrival of the command unit - which had been used at a fire in Dunback - at 4.19pm brought a more powerful communication system, which solved the communication problem, she said.

Communication issues were only with the ground crew and never between the management teams.

Dr Rotarangi said the recommendations in the review would be acted upon.

"We would be foolish not to pay attention to them and drill down on them . . . but it [the issues] didn't affect the outcome [on the day].''

Contractors driving water tankers to the fire trucks also had no radio communication, the review found. A recommendation was for ORFA to consider a GPS location system being installed on contractors' tankers for safety management.

Crews needing water to be dumped by helicopters to protect structures were unable to contact the pilot directly.

"It's debatable whether the crews on the ground should be contacting [the helicopter] directly, anyway, because they are co-ordinated by the incident management team. It's useful but it just increases the chatter,'' Dr Rotarangi said.

The helicopter pilots could not differentiate the crews from the air; consequently, identification on top of the trucks for pilots to identify crews was being considered, she said.

The firefighters showed "a lot of courage'' and never took a "backward step'' to achieve a great result.

"There was some comms issues but that's an opportunity for learning,'' Mr Voight said.

One conclusion from the review was the fire was :managed exceptionally well'' by the authority with strong support from the service.

The review team was impressed with the "professionalism and dedication'' shown by all personnel.

Dr Rotarangi said she was "pleased'' with the review and how it revealed the co-operation between different agencies, which limited the property damage.

"Firefighters worked their guts out that day and I'm personally really proud of the operational review.''