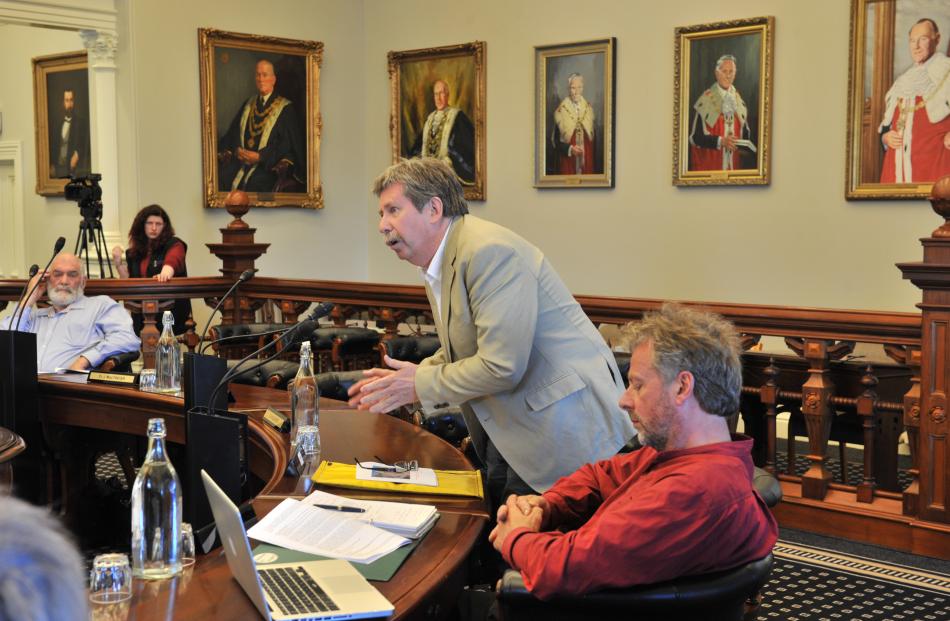 Cr Richard Thomson asks a question during the Dunedin City Council's extraordinary meeting on Saddle Hill in the the Municipal Chambers yesterday. Photos by Linda Robertson. 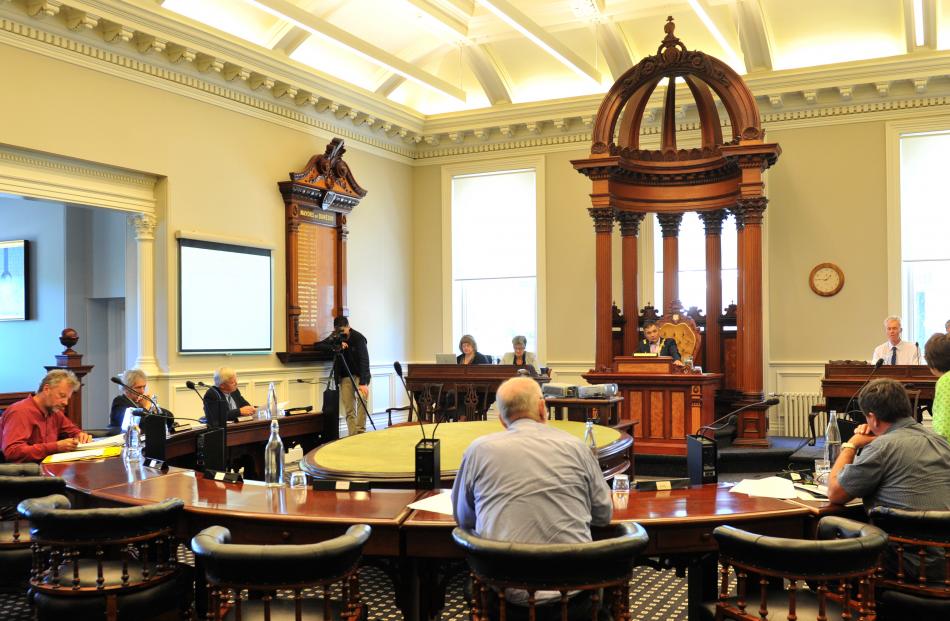 The Dunedin City Council voted resoundingly yesterday to return the issue of quarrying on Saddle Hill to court and rejected a recommendation to relax restrictions on the quarry's owners.

The return to court for the long-running conflict over how much can be quarried from the lower of Saddle Hill's two humps, Jaffray Hill, comes after the High Court last year ruled there was a consent for quarrying, but asked both parties to reach a consensus on conditions.

At an extraordinary meeting yesterday, councillors voted in favour of leaving the decision on resource consent conditions up to the Environment Court after no agreement could be reached with quarry owner Saddle Views Estate Ltd.

However, they voted against a staff recommendation to increase the area which could be quarried on the lower part of the hill.

On the issue of extending the quarry, Cr Richard Thomson said the council should not be giving away anything to Saddle Views Estate Ltd before the issue returned to court and the interim enforcement order restricting where it could quarry should remain in place.

''Why would we voluntarily hand over the only negotiating position we have with a company that has demonstrated little appetite to negotiate a solution that bears in mind the community's concern?''

''The community has made very clear that there are limits to what you can do to an environment and the limits have been well and truly reached on this one,'' he said.

Cr Thomson noted the company was attempting to have the interim enforcement order cancelled and expressed concern it could ''presumably bulldoze the lot'' if it was successful.

Council resource consent manager Alan Worthington responded that the company's ability to quarry the hill would ''essentially be unfettered'' if it was successful.

Other councillors also raised concern about increasing the area which could be quarried. Cr Kate Wilson believed the community would share the view that it would have a less than minor effect.

''I have to say that I am disappointed that advice even got to this table.''

She was also concerned about the risk parts of the hill could collapse if the extra area was quarried.

Responding to a question about the quarry owner's plan to return the hill to its former shape by re-filling it, chief executive Sue Bidrose said such a process would take ''decades'' and would require a new resource consent application.

''That would require a whole separate set of consenting processes, because that certainly would have not been envisaged in the 1960 resource consent.''

Speaking after the council's decision, Saddle Views Estate Ltd director and quarry owner Calvin Fisher said he was disappointed but not surprised at the outcome

''This isn't about fairness, this isn't about mediation, this is about a council determined to close down a legitimate business that the High Court said has a consent,'' Mr Fisher said.

He again pushed the company's plan to continue quarrying and then return the hill to its ''former glory'' by re-filling it, saying what was there now was ''dysfunctional to what it was''.

The hill was over one-third gone, and down 48m from its former pinnacle because of historic quarrying. The rim the council was talking about protecting was just waste from previous quarrying.

''The [council] have got no appetite to genuinely put the mountain back to its former glory,'' he said.

Dunedin South MP Clare Curran, who has been campaigning on the issue, welcomed the council's decision.

''I hope the Environment Court takes this issue extremely seriously, given the longevity of this issue, the depth of public interest and the precariousness of that skyline,'' she said.