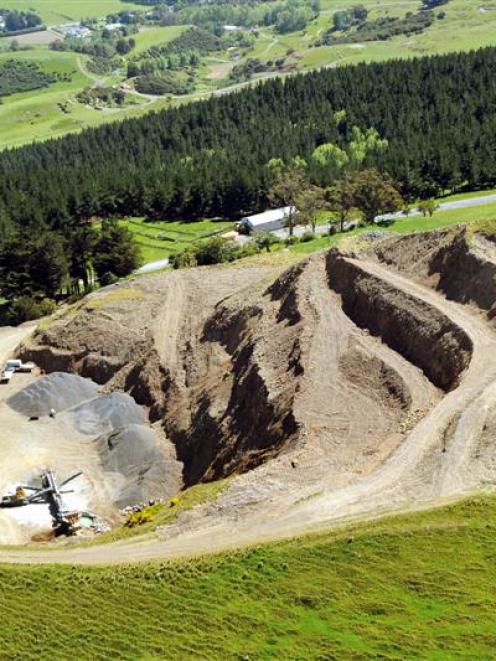 Workings at the Saddle Hill quarry are visible in this aerial photograph taken last week. Photo by Stephen Jaquiery.
The company behind the controversial Saddle Hill quarry says it wants Environment Court confirmation the hill "can be quarried without restriction".

And company director Calvin Fisher yesterday said the question of the quarry "has always been whether the community valued the skyline sufficiently to compensate the owner for surrendering its rights".

Saddle Views Estate Ltd is about to head to the Environment Court, after the Dunedin City Council announced mediation with the company had failed, and the council had decided to reactivate a court process to decide the legal right of owners to continue quarrying on the site.

Saddle Views Estate's shareholder is the Amalgamated Workers Union New Zealand, a union that represents up to 300 Dunedin City Council staff, and dozens of other unionised workers at various workplaces in Dunedin.

The president of the union's executive, Invercargill City Council water treatment plant operator Nick Knight, yesterday said that he was unable to say anything about the issue, citing a union resolution that any media comment had to be cleared with the secretary before being made public.

The secretary was Mr Fisher, whom the executive employed as an official.

Mr Fisher criticised the "hazy, foggy, unpredictable" council that had not had issues with the quarry when its own company, Delta Utility Services, had the rights to quarry in the past.

Quarrying on Saddle Hill has been an issue since the removal of material began in the 1950s. Council staff started investigating quarrying activities last year, and the company was asked by the council to provide evidence to support claims it could continue quarrying in the protected landscape conservation area.

Mediation followed, but that ended with this week's announcement.

Responding to that, a press release from Mr Fisher yesterday said the company welcomed the fact "that its quarrying rights are going to be determined without doubt".

"It believes this should put an end to the comment and innuendo that the quarrying will not continue."

On the comments about compensation, Mr Fisher said that was a matter that was "in all the archival material" between parties in the past.

Asked what he had to say to people who were concerned about the future of the landform, Mr Fisher said those people should be concerned "about the council's handling of the opportunity the council created for themselves that they've now decided to go to court with.

"They should be questioning their councillors about the circumstances that have resulted from the council's decision to do what they've done.

"We've just followed what the council has dictated to us."

Dunedin Mayor Dave Cull yesterday said Mr Fisher was referring in the press release to the possibility the council might buy the property.

Mr Cull did not agree there had ever been such an offer to the current council.

On the comments about quarrying "without restriction", Mr Cull said that just set out the company's position it had rights to do so, and he was not concerned by it.

But Saddle Hill Neighbours Group spokesman Colin Mackintosh described the release as dictatorial and biased, "which is to be expected".

"Talk about compensation clearly shows that their sole motivation is to make as much money as possible, without any regard for landscape values, social values or traditional Maori values."

Mr Fisher said the union had a policy of investing in areas where it had membership.

He was frustrated about his communications with the council over a long period.

"We've done nothing different than people have done for the last 100 years."