Sanctioned by the source 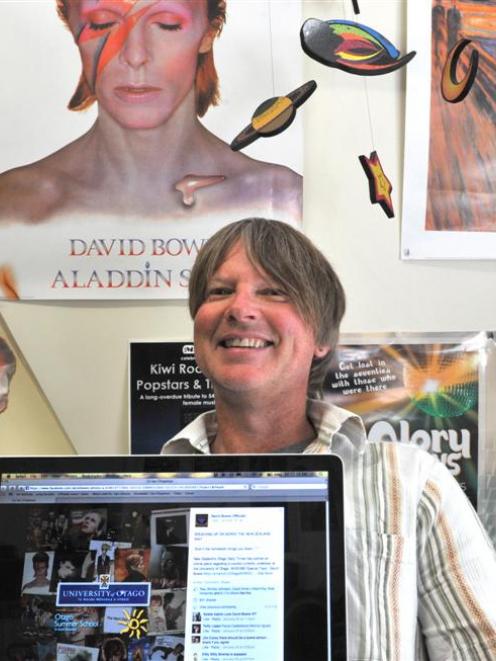 University of Otago contemporary music lecturer Dr Ian Chapman holds a computer which shows David Bowie's official Facebook page sharing a story about his summer school paper. Photo by Gregor Richardson.
Rock legend David Bowie has given his seal of approval to a University of Otago paper which explores his career.

Contemporary music lecturer Dr Ian Chapman was pleased after a story on his summer school paper, published in Allied Press newspaper The Star, was shared by Bowie's official website and Facebook page, attracting more than 6000 likes from fans across the world.

Dr Chapman accepted the story was likely picked up on by one of Bowie's ''minions'', but believed the man himself - given he was renowned for keeping a tight control over his image - probably had a say on it going up on his pages.

''It is really pleasing. As far as I am concerned it is getting the official sanction from David Bowie and I couldn't ask for more than that.''

The attention the paper had got as a result of being shared was ''vindication'' for going ahead with it.

''I am aware that there are people out there that don't think someone like David Bowie is a worthy academic topic, but I don't buy that for a minute.''

Apart from Dr Chapman being a Bowie fan, he chose to do a paper on his career because he was uniquely ''interdisciplinary''.

''You can look at Bowie in ways that you can't look at other rock stars, because he has touched gender and film and theatre and all these other disciplines.''

He was not the first academic to cover Bowie's career.

''I don't think he will be super surprised that he is now being looked at in academia because that has been a trend in recent times.''

In sharing the story, Bowie's official site referenced lyrics from his song Kooks from his 1971 album Hunky Dory.

''And if the homework brings you down/Then we'll throw it on the fire and take the car downtown.''

Dr Chapman said he was not too worried if his students followed the spirit of those lyrics.

He would definitely be teaching the paper again.