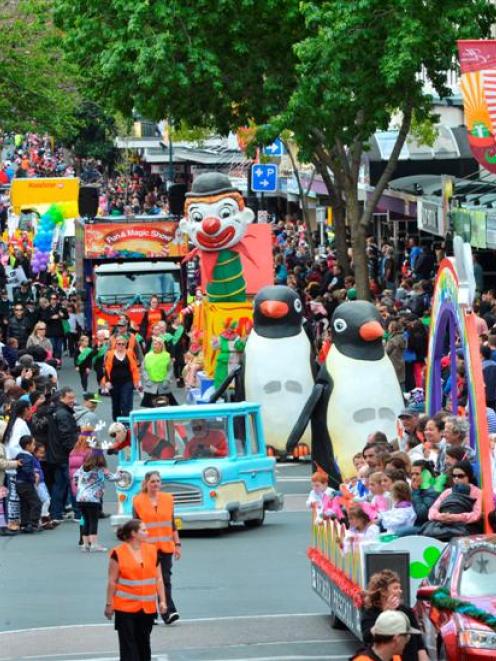 The Robb family said the parade up George St to the Octagon provided a reprieve from an otherwise ''awful week''.

The family of six had lost a loved one and attended a funeral on Saturday but danced to the Christmas music at the parade yesterday, which had ''helped with the healing'' process, Mr Robb said.

''It was absolutely fantastic.''

Brooke Loper (12), of Mosgiel, said the floats were ''awesome'' and the parade was better than past years, because she got to watch it all from the street rather than being on a float.

The 78 floats ranged from a jaw-flapping dragon to referee-jumping roller-skaters and a giant albatross that bellowed Cliff Richard's song Summer Holiday to mark the official start of the festive season.

''We were very pleased with the size of the crowd and their behaviour.''

The ''blustery'' winds were tempered with hot sun to create great parade conditions and ensure it flowed smoothly and slowly, without gaps, Mr Driver saidThe Burns family, of Dunedin, agreed.

The family of four said they had been to eight Dunedin parades and yesterday's was the best so far.