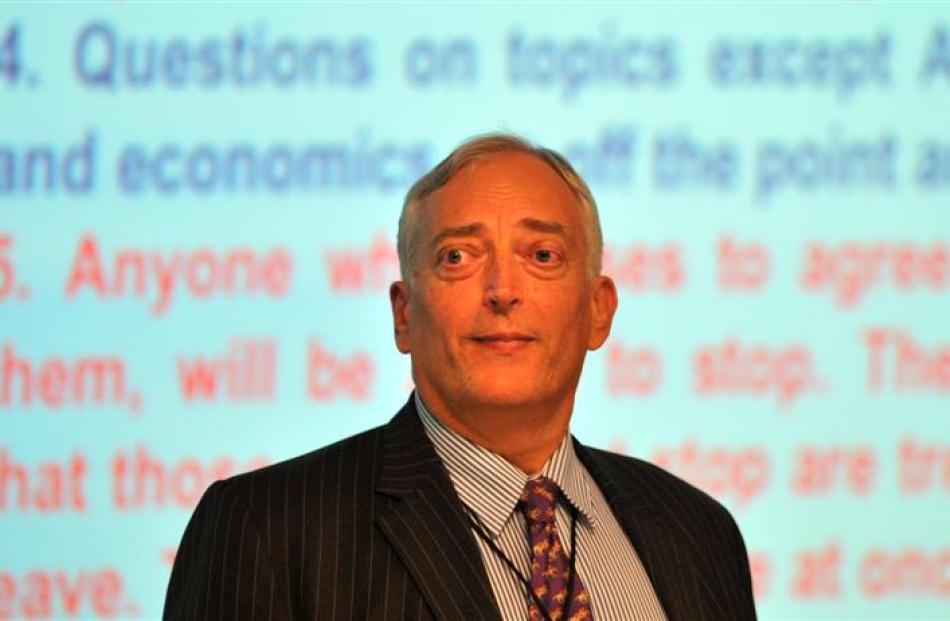 A visiting climate change sceptic took aim at the scientific community and governments when he spoke in Dunedin yesterday.

A former adviser to Margaret Thatcher, Lord Christopher Monckton (61) spoke to about 160 people at the Savoy yesterday afternoon and 60 people at Otago University in the evening.

During his talk he rejected the scientific community's opinions on climate change, saying scientists were ''drips under pressure'' to fall in line with the consensus, which was also backed by governments and councils.

''Your anger should be mounting when you see what they are doing with science,'' he said.

He brought up United Nations climate change action plan Agenda 21, which he said was a plan to bring in world government and decrease the world's population.

Speaking before the talks, Otago University sciences pro-vice-chancellor Prof Keith Hunter said he did not have ''a particularly high opinion'' of Lord Monckton and declined an invitation to debate the issue of climate change yesterday.

''It ... [would have invited] the conclusion that the person who has the best-sounding argument is the one who is right and that isn't the way science works. He understands the principles of debate. The problem is you don't decide the laws of physics on debate,'' he said.

Prof Hunter said people should remember Lord Monckton did not have a scientific background.

''Put it this way, would you accept advice on open surgery from the local butcher?''

Lord Monckton's ideas were dangerous in the same way as scepticism about the health effects of smoking, ''in the sense that doing something about climate change is important'', he said.

Responding to Prof Hunter's comments, Lord Monckton said some scientists had committed fraud, including a New Zealand scientist who was under investigation. Just because there was a consensus on climate change did not mean it was correct.

The accepted consensus on the cause of stomach ulcers had changed after 13 years, he said.

His ''fact-packed'' presentation on climate change trends had shown how researchers' predictions on changes in temperature, sea-level and methane concentration had been consistently ''wrong''.

He wanted people to judge the scientific models which had proven wrong with time, he said.

''In the end, events will prove my theories right.''

His scepticism was not dangerous, he said.

''I think we are looking at 1degC of warming this century. Is this a problem? Of course it's not.''

Even if he was wrong, the consensus was that it was not cost-effective to mitigate global warming, Lord Monckton said.

Lord Monckton will speak in Gore today and end his national tour in Invercargill on Friday.

A group of three protesters purporting to be from the ''Flat Earth Society Dunedin Branch'' stood outside Lord Monckton's talk at Otago University last night, which was attended by about 60 people.

They handed out satirical leaflets which said ''like you, we have been downtrodden by an extraordinarily complex conspiracy of governments''.