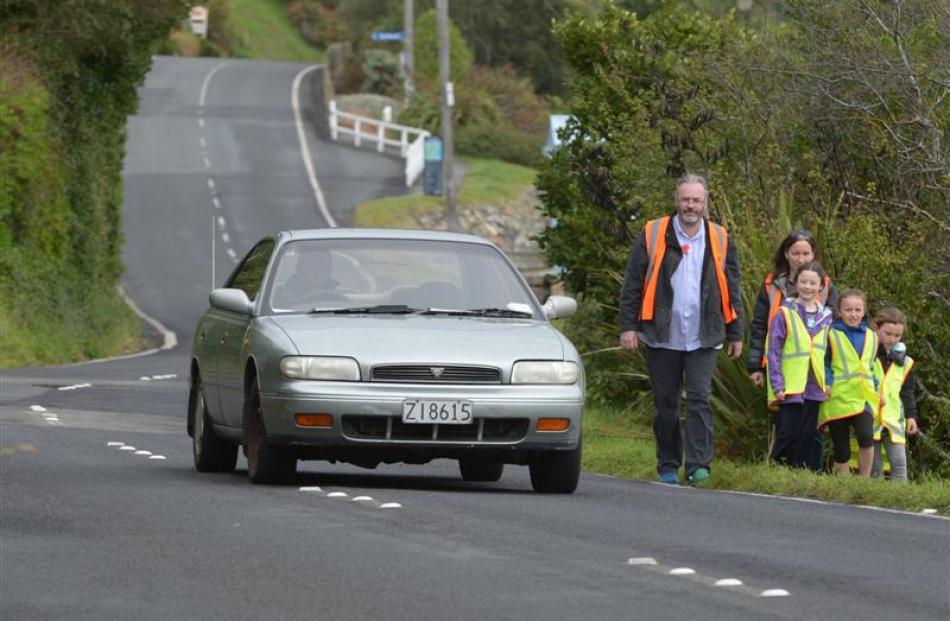 The Broad Bay School community is frustrated and angry the Dunedin City Council may be about to do a U-turn on road-widening work in the area.

• 'Near misses' for Portobello pupils

Broad Bay School board of trustees chairman Sean Hogan said there had been a promise from the council since 2005 that the Portobello road improvement - a walkway and a protected cycle path - would be built in the next 12 months.

He said the initial plan was for road-widening work to take place at Macandrew Bay and Company Bay, then on the road between Portobello and Broad Bay, followed by several other stretches on Portobello Rd.

However, the issue of the order of the work has now been opened up to consultation with the community under the council's draft annual plan.

''This came as something of a shock to the communities along the peninsula because they believed this was set in 2005.

''I struggle a little to understand why the council has done this.''

Mr Hogan said there were ''a number of offerings'' in the draft plan about the order that work might follow.

''The worst scenario for Broad Bay moves starting the work that would join Broad Bay with Portobello from this year, to expecting to complete it in 2023.

''To put that into some perspective, it would mean the oldest children at Broad Bay School would have had time to go to high school, graduate and become teachers before the work is completed.''

He said the community felt strongly the council should stick to the present plan.

''Initially, there was anger because it felt something like a breach of trust.

''Over time, it's become an opportunity to galvanise the community into action.''

Mr Hogan believed the council should prioritise the Broad Bay to Portobello section of road because between 2008 and 2013 it had twice as many serious accidents as any other part of the peninsula route.

It should also be prioritised because pupils at Broad Bay School came from Broad Bay, Portobello Rd and Portobello itself, he said.

''So, for them to ever have any alternative, other than being driven on a rather winding and dangerous road, we need a walkway.''

Mr Hogan said it was unfortunate the council had chosen to open the issue for consultation.

''Effectively, what it does is it encourages people to think what's the benefit for my part of the community. And I think that's sad.

''It's setting people who actually care about communities or about safety or about important issues, against each other in a sort of inverse beauty contest.''

Dunedin City Council Transportation Group capital delivery manager Evan Matheson said as the road-widening project progressed, residents had realised the benefits of the changes and had queried what part of the road would be developed next.

''For the last two annual plans, there have been a number of submitters asking if council was still on the right track with its sequencing.

''There's been a whole lot of water go under the bridge, arguably. It's certainly timely that we do a review ... it's a logical time to pause and think what's best for the local community and best for Dunedin as a whole.''

Submissions to the annual plan closed last week and a decision on the order would be made early next month by councillors, he said.