Enjoying a reunion of Wakari School form 2 class of 1953, at Equinox Restaurant and Bar in Dunedin, are (from left) Nick Anderson, of Christchurch, Nancy Rutledge (nee Hunter), Danny Knudson, Nora Burgess (nee Mawhinney) and Rodger Storer, all of Dunedin (all aged 80). Photo: Linda Robertson
Numbers may have dwindled over the years, but five former Wakari School pupils are dedicated to keeping up their reunions.

The group, who were in the same form 2 class of 1953, met at Equinox Restaurant and Bar yesterday to share old pictures and reminisce. And it was clear why the 80-year- olds have kept in touch for so long, as laughter continuously erupted from their table.

‘‘It is true what they say - when you make friends at school, they seem to last a lifetime,’’ Danny Knudson, of Dunedin, said.

He was joined by Nick Anderson, of Christchurch, Nancy Rutledge (nee Hunter),  Nora Burgess (nee Mawhinney), and Rodger Storer, all of Dunedin.

Mrs Burgess said, as time went on, it had become harder to keep in contact with the whole class, as people moved towns and changed phone numbers or emails. ‘‘It is a bit sad.’’ 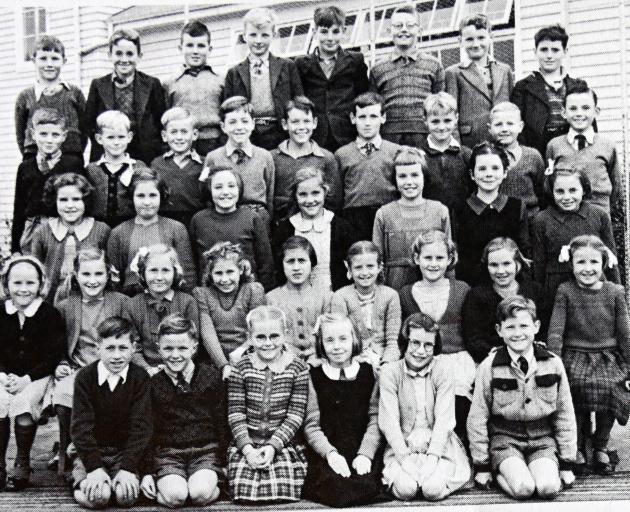 Wakari School’s standard 3 class in 1950. Photo from Wakari School 1858-2008 150th Anniversary by Julie and Danny Knudson.
But luckily for her, Mr Knudson and Mr Storer still lived just around the corner from each other, in Wakari.

‘‘When they talk about history in Wakari, we were there,’’ Mr Knudson said.

Most of the group said  many generations of their family had attended Wakari School, including Mrs Burgess who had five generations of her family complete their primary education there. ‘‘We are very unadventurous in our family,’’ she said.

The last time the group got together was in 2008, when the school celebrated its 150th year. The school has now been around for more than 160 years, but Mr Knudson  stressed that the group were not among the school’s first day pupils.

This time, it was Mr Anderson who brought them together, as he was down visiting from Christchurch.

It was a time to not only look back, but also catch up on each other’s lives and what they had missed in the past few years.

‘‘To be perfectly honest, a lot of them don’t seem to have changed very much,’’ Mrs Burgess said.

The group planned to meet for many more years to come, and hoped to ‘‘drag up’’ a few more names to join them.