By John Lewis
2 Comments
About 3000 Otago and Southland pupils are starting to tuck in to free lunches after 18 of the region’s schools joined the Government’s free and healthy lunches programme.

The programme is being introduced in stages, and this is the first time it has come to the South, Education Minister Chris Hipkins said.

Eleven schools had already begun serving lunches, and seven were preparing to start during term 3.

This was in addition to the 42 other schools already taking part around the country, he said.

The programme was expanded in the Budget this year, to allow about 200,000 more children in lower decile schools to have a free lunch by the end of 2021.

"No-one wants to see children go hungry, and a full stomach makes all the difference to a child’s learning," Mr Hipkins said.

"The Covid-19 pandemic has added urgency to support like this." 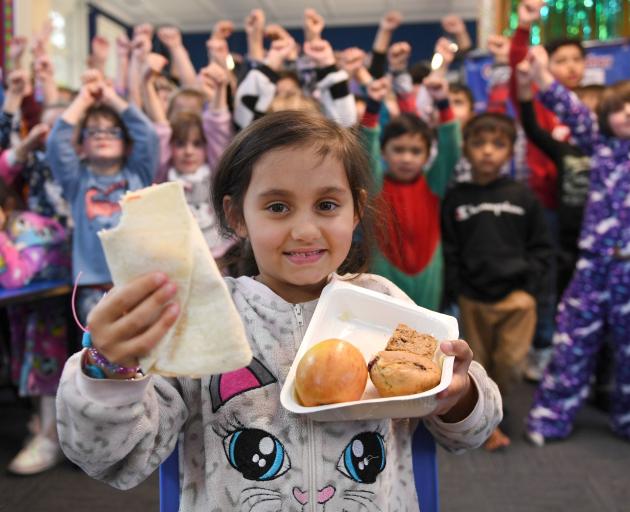 Pine Hill School principal Mel Ward said she was "absolutely thrilled" her school had been selected for the programme.

"It’s amazing for our school and our community.

"We’ve had lots of great feedback from our parents who are really appreciative of it, especially being in a low socio-economic area."

She said a bonus of the programme was that pupils were more curious about healthy eating and trying foods they might not normally eat at home.

"We have a high number of former refugee children here as well, so they’re also eating a lot of food they haven’t tried before.

"Every day, the big white boxes of food come into the classroom and they’re like, ‘Ooh, what’s in there today?’.

"There’s a real variety of food in the boxes, and the hope is they will go home and talk about the food they’ve been eating at school, and it becomes part of their diet at home too.

Mr Hipkins said he had received similar feedback from other participating school principals, who had reported improvements in pupils’ focus in the classroom, learning, behaviour and attendance.

The programme was also a way of creating local jobs, he said.

“Several schools already taking part in the programme have employed whanau to help make and distribute lunches on school sites.

"In some areas, locals have been employed by regionally based suppliers providing lunches.

“It’s a win-win for the students and the community."

Expansion of the nanny state paid for by you. Most kids do not need food supplements, but rather some parents need budgeting and nutrition education- all of which available free online. I remember drinking warm milk as a kid, yuck!- but we did not have the internet then- it is a choice of parents/kids on how/what on we use their time for.

WHO PAYS FOR THIS?

I'm disgusted by this. So now, according to the government, it is no longer the responsibility of parents to feed their own children.

And now, as one of the working people in New Zealand, I'm paying not only for my own four children's lunches, but countless others as well - other "parents" (I use the term very loosely) who cannot or will not be bothered to provide for their own children.

I'm on a basic wage. If I can provide for four children on that, there are no excuses for anyone else not being able to feed their own children.

If you won't or can't feed your kids, you are not a fit parent.